Anker’s second generation of GaN power supplies packs even more juice into a handy form factor, replacing almost all other chargers on the go and at home.

Modern technology is awesome! Smartphones, tablets, notebooks, wireless headphones, cameras – everything is better than it was ten years ago. It feels like there is even more technology in our own pockets. Which in turn leads to a problem all of its own – chargers.

When you pack for a trip, you often have to take countless chargers with you. It sometimes feels like every piece of electronics has its own charger. If you are still using devices from different systems (e.g. Android and iPhone), it gets even worse. But even at home there are not always enough sockets. Old buildings in particular usually have too few sockets and so there is often a distribution strip on each individual socket. It would need a multi-charger, but it can also provide enough energy to charge everything from notebooks to cheap Chinese children’s toys. Curtain up for the Anker 737 GaNPrime 120W charger.

The 3 best DJ controllers from Pioneer, Native Instruments and Denon

Classic chargers have the problem that they are very large and heavy when they are really supposed to transport a certain voltage. GaN technology changes that because they run cooler, allowing for better stacking of internal components. Anker offers just such a charger with the 737 GaNPrime 120W charger.

The Anker 737 charger is a solid build. The outer material is dark gray and although the outer shell is made of plastic, it feels exceptionally sturdy. I don’t recommend it, but I’m very confident that the Anker 737 will survive a couple of falls with no issues. 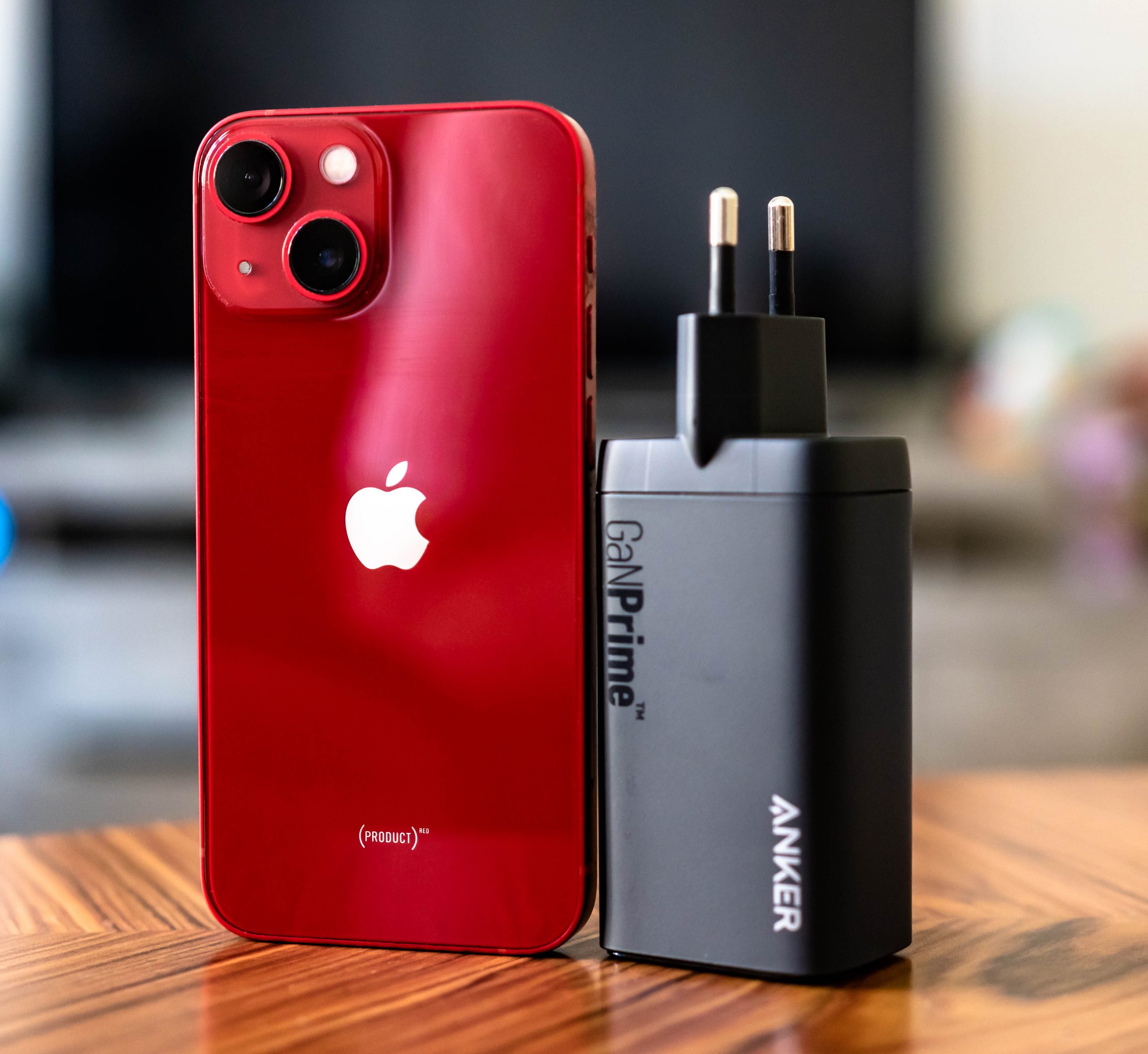 At 203g, it is as heavy as an iPhone 13 Pro. That’s not small and the weight is comparable to the 67W charger in my MacBook. Thanks to GaN technology, the Anker 737 is quite compact at 43×35.3×80mm. It fits easily in the palm of my hand and is just as quick to stow in my backpack.

There are different charging standards on the market, but not every manufacturer supports every standard. For example, some smartphone and laptop brands such as OnePlus (BBK) and Xiaomi use super-fast proprietary charging technologies. In contrast, manufacturers such as Apple and Samsung rely on non-proprietary standards such as USB-PD (Power Delivery) and PPS (Programmable Power Supply) to enable faster charging of their devices.

Anker’s PowerIQ 4.0 takes a different approach by “talking” to the end device before charging and asking exactly what it is. This then reports back, for example, with “iPhone 11”, “Galaxy S22 Ultra” or a “Dell XPS”. The device then also knows that it is connected to a power source that can deliver the maximum charging power with the correct protocol. Power IQ can therefore do significantly more than most standard chargers, which can supply a lot of energy, but cannot communicate this to the end devices and thus never reach their full potential.

Load speeds on each port – know your devices

As the name of the Anker 737 GaNPrime 120W charger already suggests, you can get a maximum of 120 watts of power if power is required on all three ports. If you only connect one device to the top Type-C connection, it is a maximum of 100W. That’s enough for modern notebooks up to the 16″ MacBook Pro. The USB-A can then provide an additional maximum of 22.5W.

If you use both USB-C ports, the 120W are distributed over the two ports. Depending on how energy hungry your devices are. Thanks to PowerIQ, loaders and devices have already negotiated how much juice each gets. If you only use the middle USB-C port and the type A connection, you only have a maximum of 24W available. The latter in particular seems a bit strange, but the connections on the Anker 737 are clearly marked and so you should always get the maximum loading speed. 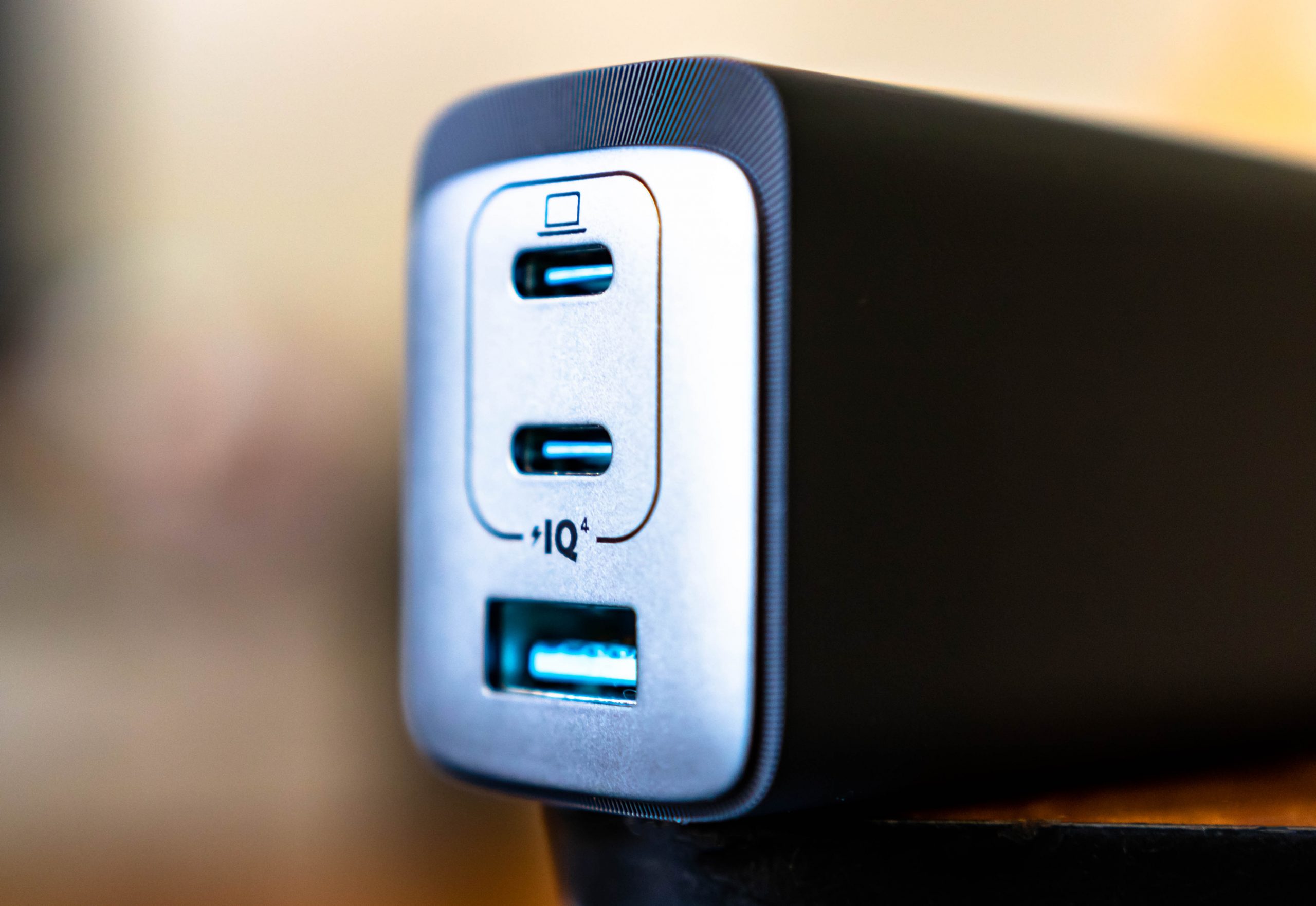 Using the correct port is important. Modern electronic devices cannot simply absorb infinite amounts of energy at once. Depending on the intended use, each device is defined with a certain maximum wattage. The Samsung Galaxy S22+, for example, can be wired charged with a maximum of 45W. iPhones typically draw a maximum of 20-25W. Smartwatches are often in the single-digit watt range because the small batteries simply do not need more.

Loading times are often given in 30-minute intervals. Alternatively, it is often said how long it takes to charge the battery from 0-50%. Of course you know that the first half of each battery is charged the fastest. But I wanted everyday values ​​and for me that means: “I have to leave in 20 minutes – fuck, the battery is almost empty”.

You can see where the journey is going – in about 20 minutes the Anker 737 manages to pump enough energy into my devices for a few hours and that’s all I want. Charging too fast over too many cycles will eventually damage the battery.

I’m generally not a friend of these almost absurdly fast loading speeds. But that’s because they often rely on a special technology from a manufacturer. The brand new OnePlus 10T can be charged with up to 150W and can thus reach 0-100% battery charge within 20 minutes. That’s definitely impressive – until the moment I don’t want to own a OnePlus smartphone anymore. Then I have a super-fast charger, which is no longer of any use to me.

Efficiency – the faster, the better

Whenever you put something between your outlet and the devices, there are losses. Anker puts the 737’s average efficiency at 85.18%. If you only tap 1/10 of the possible power of the charger, the efficiency is only 73.92%. 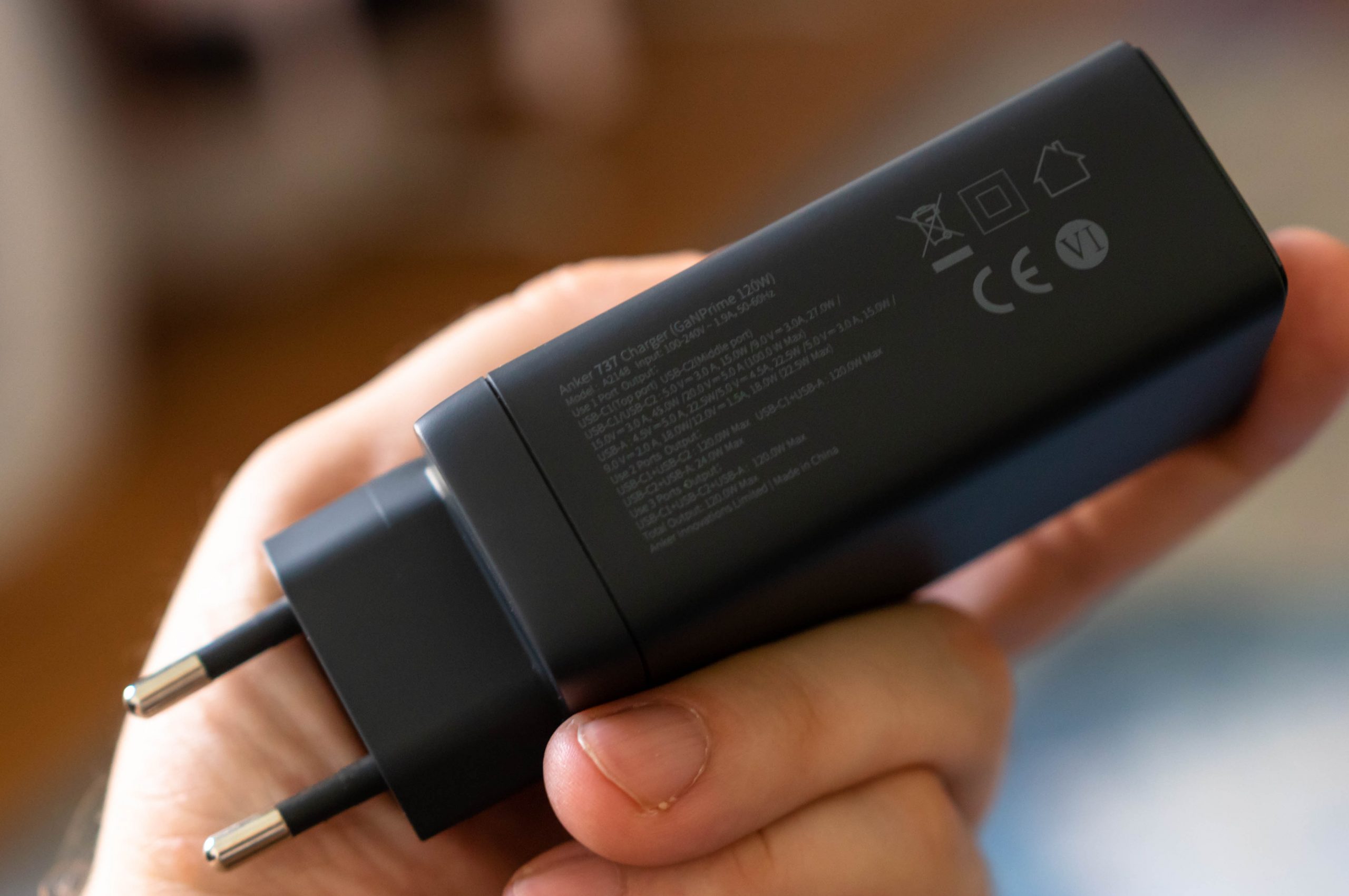 Accordingly, it is less worthwhile to only charge your smartwatch with 10W on the Anker 737. The GaN charger wants to be challenged and should therefore be operated with several devices at the same time. If you don’t use any power at all (because there is no device connected to the charging cable), the Anker 737 consumes 0.23W.

In everyday life – the one charger for everything

My household is trimmed to USB-C wherever possible. Virtually everything charges through my MacBook Pro’s 67W charger – the notebook itself, headsets, tablets, my girlfriend’s smartphone, game controllers, power banks, etc. The problem with that is that there’s only one Type-C on this powerful power adapter and sockets in Berlin’s old buildings are scarce. So if the battery of several devices is empty, a kind of pecking order is created when charging – based on priorities.

Then there are things that cannot be loaded with Type-C, but which I need very often. Things like my iPhone, AirPods or my Kindle Paperwhite – luckily I don’t have to charge the latter that often. These devices then have no USB-C port and cannot be charged with the MacBook Charger. Then you need Lightning and the worst of all standards: MicroUSB and of course a Type A charger. 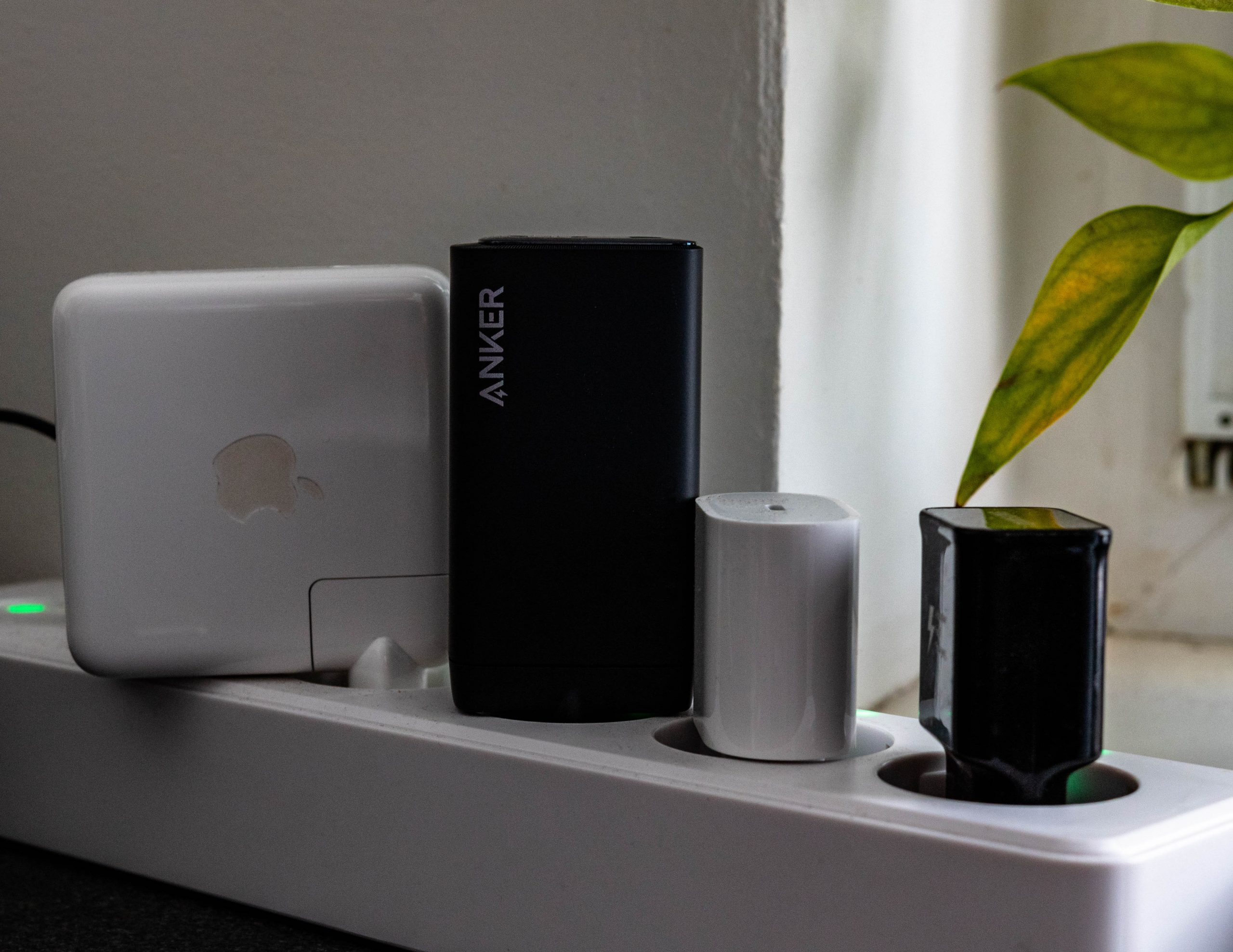 In a week with the Anker 737, I reused the MacBook Pro’s power adapter. Otherwise I just didn’t need it. Specifically, the charger charges the MacBook at 67W while charging the iPad at 30W for later, and then the Anker 737 still has enough juice left over to charge my iPhone at 20W – all at the same time and while only one outlet is occupied.

However, if you need high charging speeds, you also need a corresponding cable, since not every 4€ AliExpress cable can transfer so much energy. Anker offers various products in different price ranges. The newest (and most expensive) is the Anker 756 USB-C to USB-C cable, which is 1.8m long. That can transmit up to 140W. This is a very high-quality nylon-coated cable. But if you’re also happy with 100W, the Anker 543 cable will do as well. It’s not fancy, but it only costs €12 instead of the €33 for the Anker 756.

GaN chargers are still a fairly new technology – at least compared to conventional silicon chargers. That makes them still quite expensive at the moment. The Anker 737 GaNPrime 120W charger costs just under €100*. That’s a lot of money. But it’s also worth every penny because it’s smaller, handier and much cooler than “conventional” power supplies. 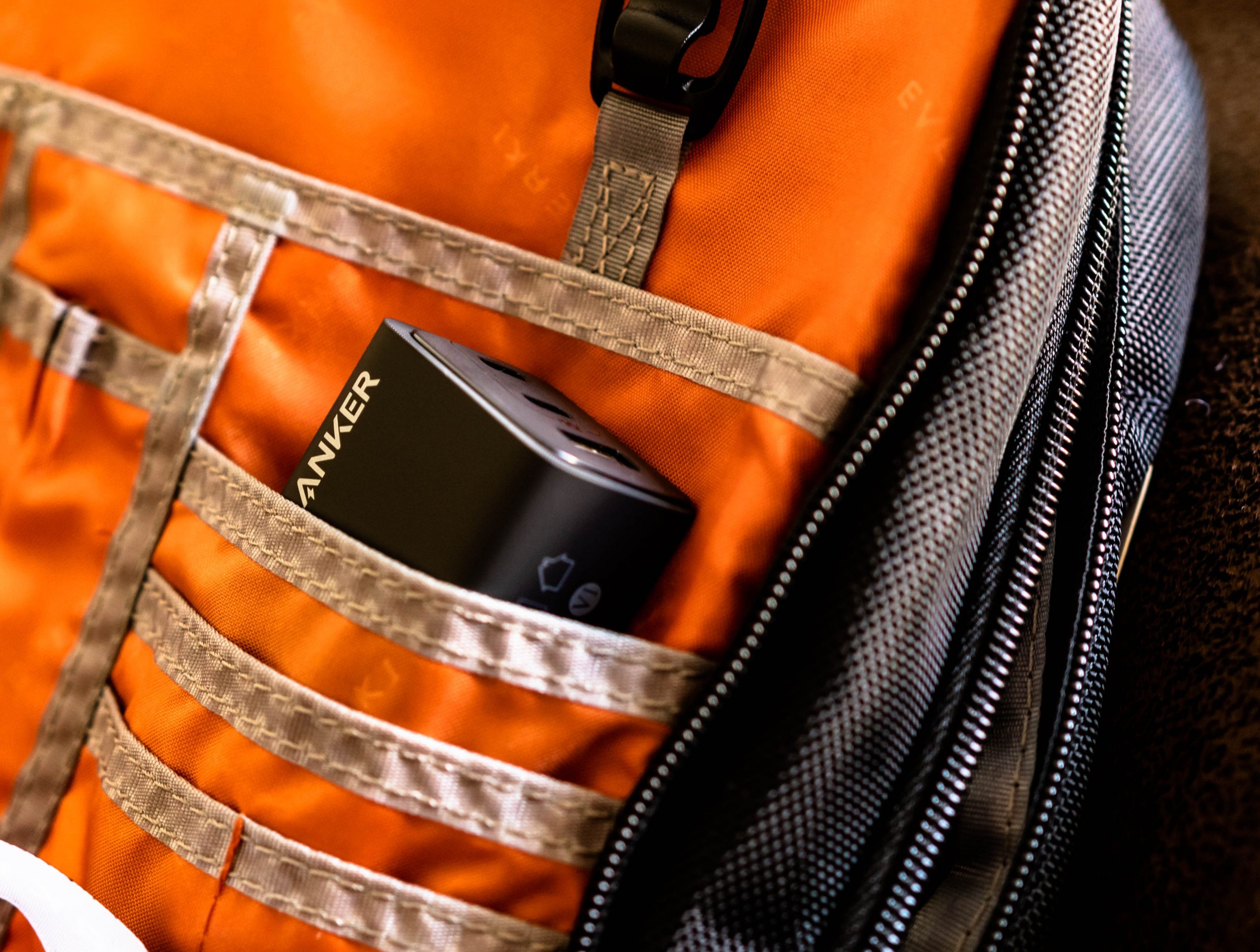 It fits perfectly in any bag and can charge practically anything, from large notebooks to the smallest gadget. Especially those who travel a lot benefit from this universal solution instead of taking four chargers and six cables with them.

In the coming years, GaN power supplies will become cheaper as the technology becomes more widespread. The more something is produced, the cheaper it becomes ( economy of scale ). But if you want a little taste of the future now, then I recommend the Anker 737 GaNPrime 120W charger. Incidentally, Anker also launched a 65W version of it. It currently only costs €60*.