Shortly before CES 2023, Intel has some news ready. These include the new Intel Core i9-13900 for desktop gamers, 13th generation processors (Raptor Lake) and the new, economical N series for notebooks.

Intel’s 13th generation of processors is called “Raptor Lake” and has already started with a handful of models for the desktop. Now the portfolio is to be expanded and notebooks are also to be reached. There is also exciting information about particularly cheap and economical processors in the new N series for entry-level notebooks.

Outdoor speakers: These 5 speakers are suitable for patios and gardens

Now, with the “classic” Core i9-13900, a cheaper variant of the flagship processor is to come onto the market. In most respects it is the same as its big brothers: 24 cores and 32 threads, divided into 8 P and 16 E cores. The powerful P-cores should be able to reach up to 5.6 GHz, but more could be possible with Intel Thermal Velocity Boost. There is also 2MB L2 cache per P-core and 4MB per E-core cluster. So a total of 32 MB of L2 cache.

Compared to its direct predecessor, the Core i9-12900, it is said to offer 11 percent better performance in single-thread and up to 34 percent in multi-thread tasks. In Guardians of the Galaxy he is said to be 6 percent faster, in League of Legends even a massive 19 percent faster. In the Puget Bench for Photoshop there should be 3 percent and in the CrossMark Creativity benchmark even 10 percent more performance. 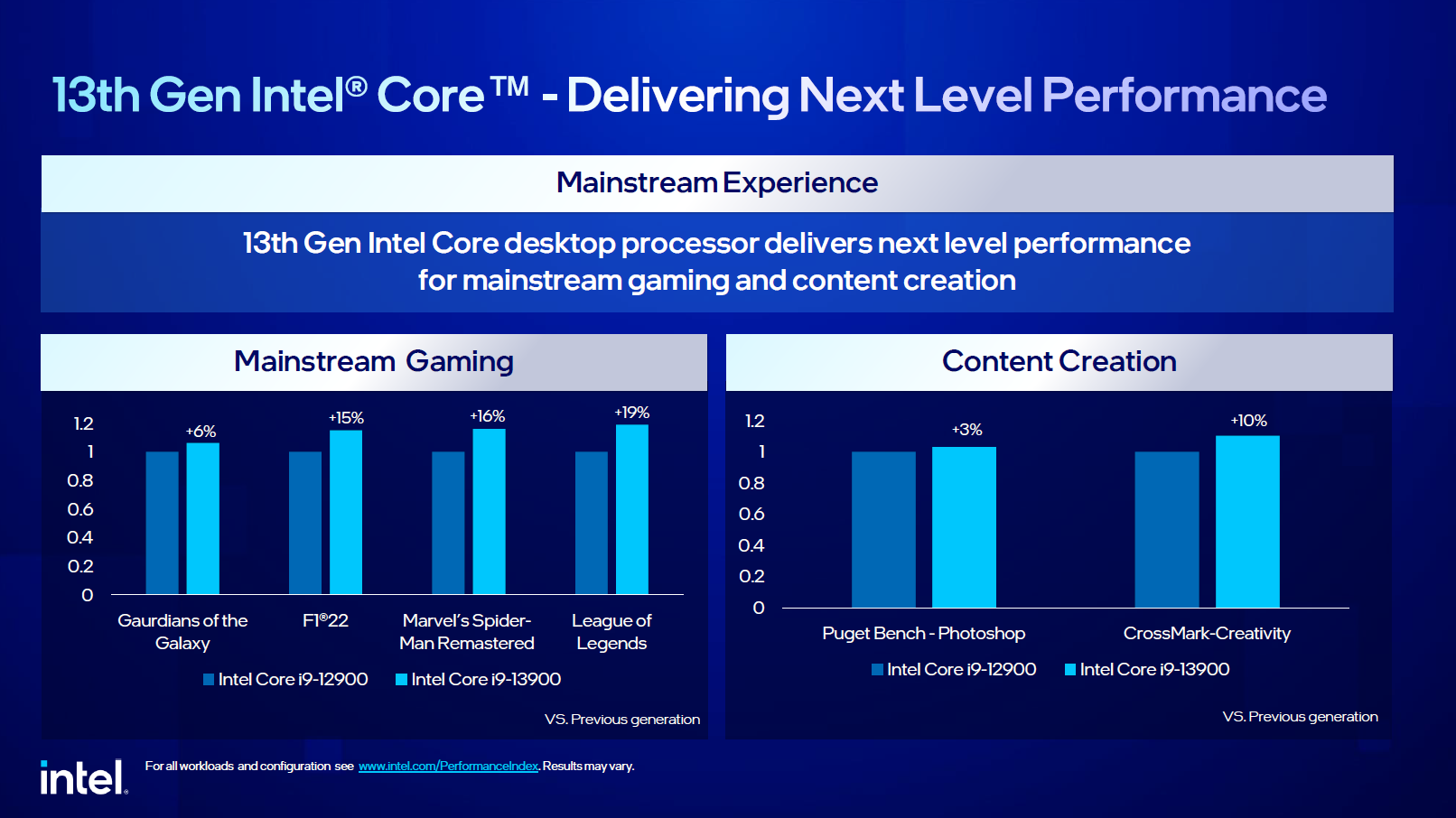 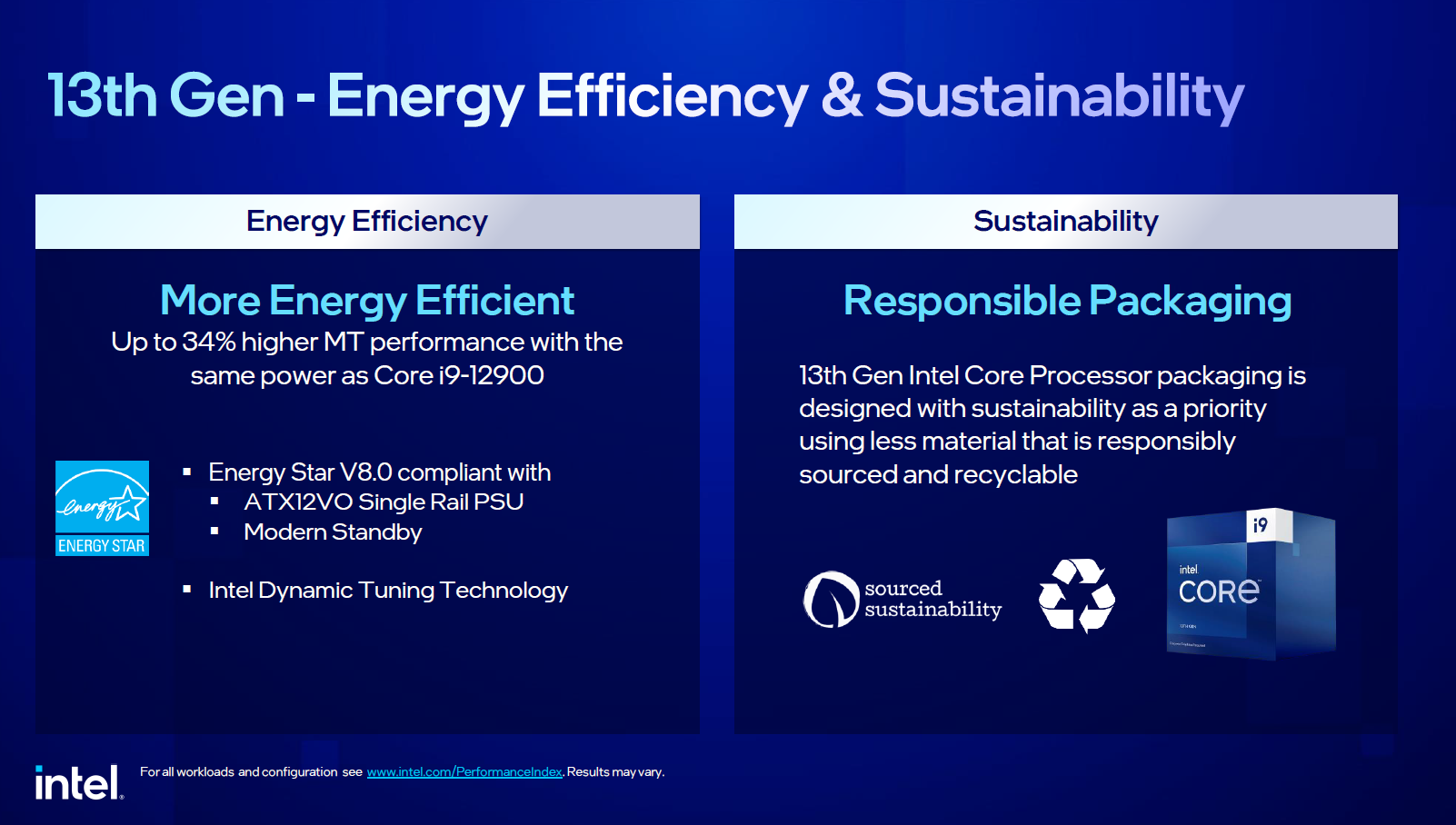 Intel particularly emphasizes the increased efficiency compared to the last generation, because the 34 percent more multi-tasking performance should be achieved with the same power consumption. 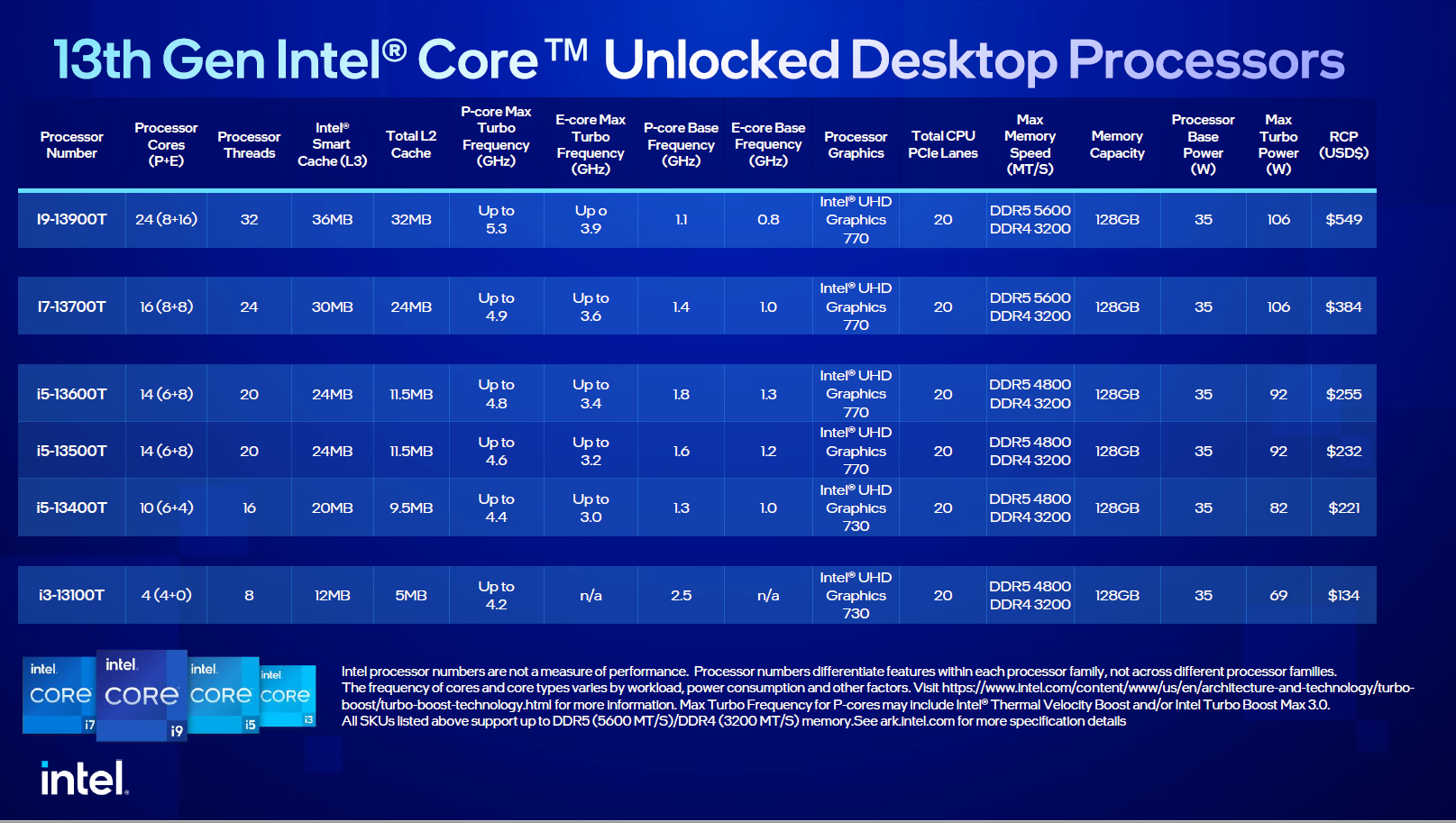 Oh yes: The Intel Core i5-13500 is also mentioned in the footnotes. This is currently popping up in the rumor mill. According to the small print of the presentation slides, it offers 14 cores and 20 threads, divided into 6 P and 8 E cores. Compared to its direct predecessor, it is said to offer up to 39 percent more multi-tasking performance.

After the desktop market was already supplied with the first CPUs, notebooks are now following.

The distribution of the processors remains the same: U models (15 watts) are intended for small and light notebooks, the P series (28 watts) for more powerful but still slim devices, the H series (45 watts) is for enthusiast Notebooks and processors with an “HX” at the end (55 watts) are designed for high performance and can be overclocked.

Even if it’s not completely new news: The Xe graphics unit of all new Raptor Lake CPUs can be controlled via the “Intel Arc Control” software. In the presentation, Intel also highlights XeSS (i.e. AI-based upscaling), which can bring more than 30 percent more FPS in certain games, such as Hitman 3 or Shadow of the Tomb Raider.

Typical for Intel, there is no overview of the upcoming processors in the presentation. The new Core i9-13950HX, which will be the new flagship for notebooks, is used as a comparison.

Of course, there are also benchmark results in which the Core i9-13950HX competed against other current flagships.

VanMoof with problems: A special e-bike is a long time coming

In addition, tests were also carried out with other creative applications (Unreal Engine, MetaHuman, RealityCapture, Premiere Pro and OBS, Autodesk Inventor and ReCap) and the new top model should clearly set itself apart from its predecessor here as well.

But there is also a look at the processors of the H, P and U series. There are a maximum of 14 cores, consisting of 6 P and 8 E cores. The Xe graphics unit can access up to 96 EUs and there are PCIe Gen5 with x8 lanes.

Up to four Thunderbolt 4 ports (with DP2.1 and USB 3.2) are possible here, Wi-Fi 6E and Bluetooth LE audio are also available. 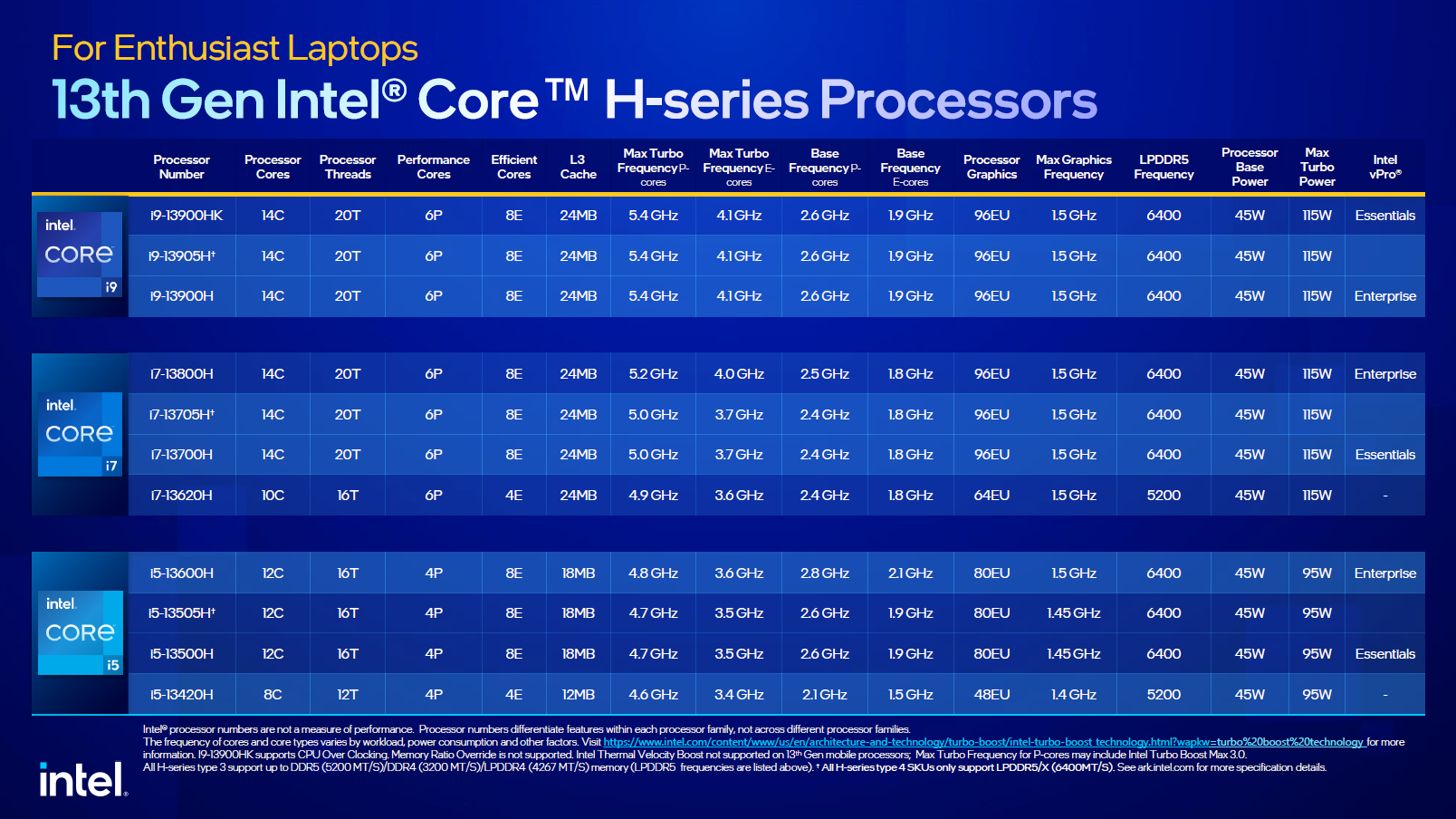 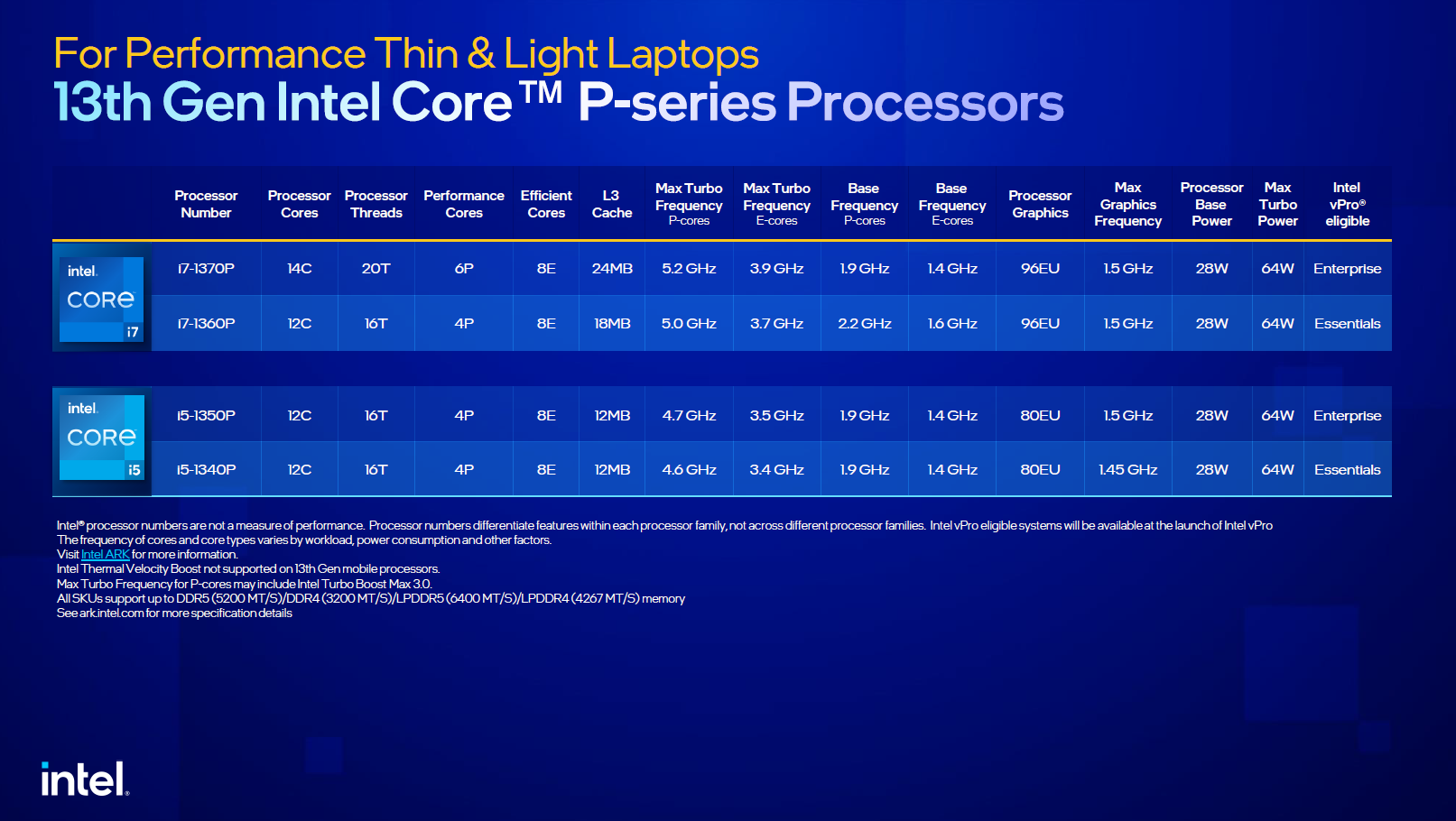 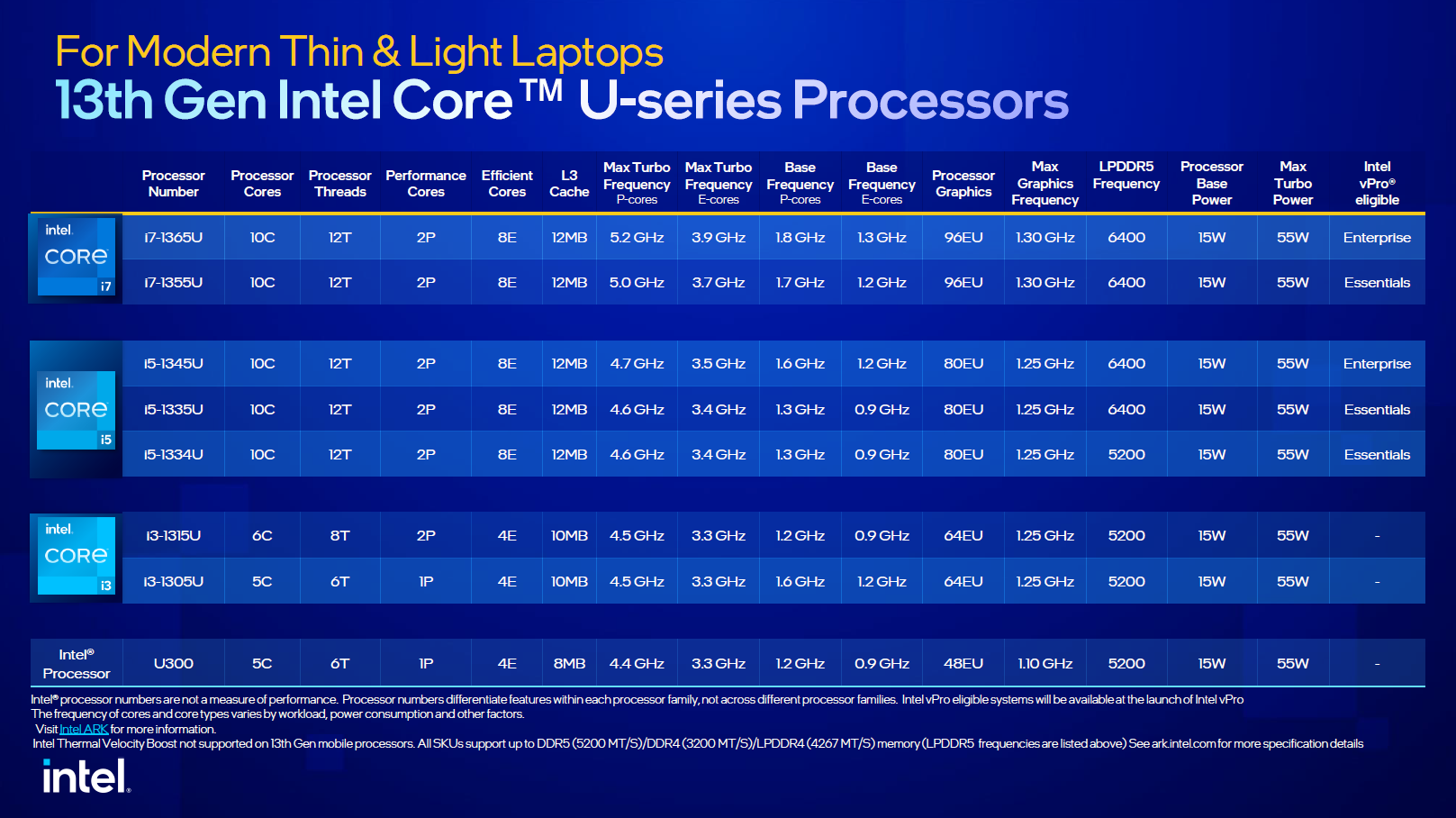 The information about the working memory is interesting: In addition to DDR5-5600 or DDR4-3200, LPDDR5/x-6400 or LPDDR4/x-4267 is also supported. The small print also says that some form factors of the CPUs “only” support three Thunderbolt 4, PCIe Gen4 and LPDDR5/LPDDR5x. These special processors are then again one size smaller.

Intel presented the so-called “Movidius VPUs” as an unexpected innovation. This means dedicated modules for KI/AI functions. The VPUs help with video streaming, relieve the CPU/GPU of certain tasks and should be seamlessly integrated into the Windows operating system.

However, there is no precise information on this. VPU modules should be offered as an additional option for certain notebooks for developers and early adopters.

Of course, Intel continues to work on the EVO project. This refers to special notebooks that meet Intel’s strict guidelines and have been worked closely with the respective manufacturer.

Of course, these guidelines have been adapted and expanded for the 13th generation of processors.

There is also a new Advanced Connection Manager. This is part of the Intel Connectivity Performance Suite for Intel Evo notebooks. There the network performance can be adjusted for certain activities and/or categories of applications and thus be managed more intelligently. Example: Active video streams on Netflix are prioritized over background downloads from Windows.

In addition, the Intel Unison function will be rolled out for more notebooks. This allows Android and iOS smartphones to be closely connected to a notebook and, for example, to make calls or answer messages.

The list of EVO partners is growing and has now been expanded to include manufacturers of mice and keyboards as well as access points.

Intel has been serving the entry-level notebook market for many years with the Pentium Silver and Gold processors. These work particularly economically and are completely sufficient for most applications. Target groups are large companies, schools or users with simple requirements.

With the two new CPU series “Intel Processor N” and “Intel Core i3-N” an improved architecture and thus more performance should come into this area. An Intel Pentium Silver N6000 is used for comparison.

The new processors are based on the Gracemont microarchitecture (Intel 7) and offer 4 or 8 E cores. There is also a graphics unit with 32 EUs, support for LPDDR5, DDR5 or DDR4 memory, USB 3.2 Gen 2 and DP 1.4, Wi-Fi 6E and Bluetooth 5.2 and even AV1 decoding is now built in.

Overall, the two new processors look like a long-awaited upgrade from the entry-level range and should be a big leap forward there.

What do you think of Intel’s news for CES 2023? Let us know in the comments section.