Dreame has two very similar cordless vacuum cleaners in its range, which only differ in details. In the test, we clarify who should go for the “Pro” and who can save the money.

Dreame belongs to the Xiaomi group, but usually doesn’t let it hang out that way. In recent years they have built a respectable reputation for selling vacuum cleaners that offer very good value for money. But to be fair, it wasn’t difficult. Dyson vacuum cleaners have exorbitant prices and the alternative are the cheapest Chinese vacuum cleaners for €50 with a cable, which are half broken after they fall over.

Currently free of charge instead of 1.99 euros: iPhone app does things differently

I already had the latter – I don’t need it again. In my search for my next vacuum cleaner, I came across the Dreame V12 and its “Pro” version. The normal V12 costs around €85 less than the V12 Pro, which costs around €360. So the question was, what more do I get with the “Pro” and do I notice that in practice?

Dreame V12 vs V12 Pro – the technical data in comparison

If I compare two products with each other, a table is always useful. So here are the technical data of the two Dreame vacuum cleaners in direct comparison. Differences are highlighted

The technical differences between Dreame V12 and V12 Pro are not really big. The Pro has a little more “power”, but also the smaller battery. It’s rather unusual for a “Pro” device to have a smaller battery. This in turn leads to a shorter stated runtime. 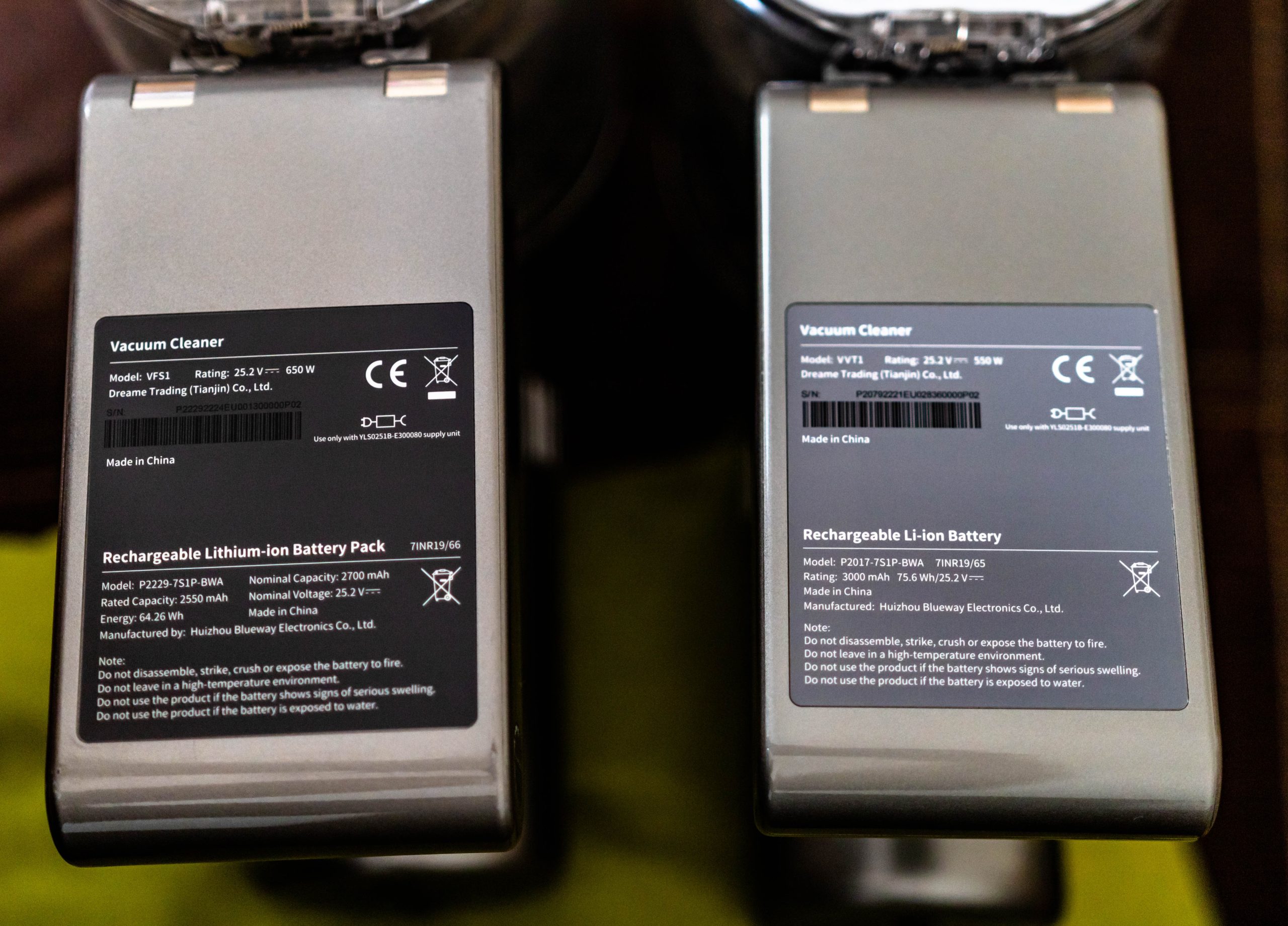 On the other hand, it’s not really surprising either because the Dreame V12 Pro is actually the successor to the V12. In China, the Pro is called Dreame V16. You can currently find both online at the same time. But enough of the gray theory – let’s get into practice.

From the first second it becomes clear that these are really very similar vacuum cleaners. You have to look closely to find a visual difference between the two Dreame devices. Even when it comes to the scope of delivery, both are practically identical.

There are a few differences in the color accents. The Dream V12 Pro has a gold border around the suction unit, while the regular V12 has a silver border. There are also some red accents on the normal V12, but apart from that the two devices are confusingly similar.

Both suction cups are also very good when it comes to processing. Gaps are small and absolutely even. There is a slight difference in weight, but I can’t say I really noticed it in practice. Another difference is the presentation of the display elements, but these are purely design-related. Neither display shows more information than the other. I’m not sure yet if I like the fact that so many parts are made of clear plastic on both Dreame teats. In my experience, such parts will never be as clean as the moment you take them out of the box.

When it comes to pure handling, the Dreame V12 and V12 Pro are practically the same. The differences in weight are also not noticeable in practice. In addition, the dirt containers (identical 0.5L) can be emptied very easily on both devices. 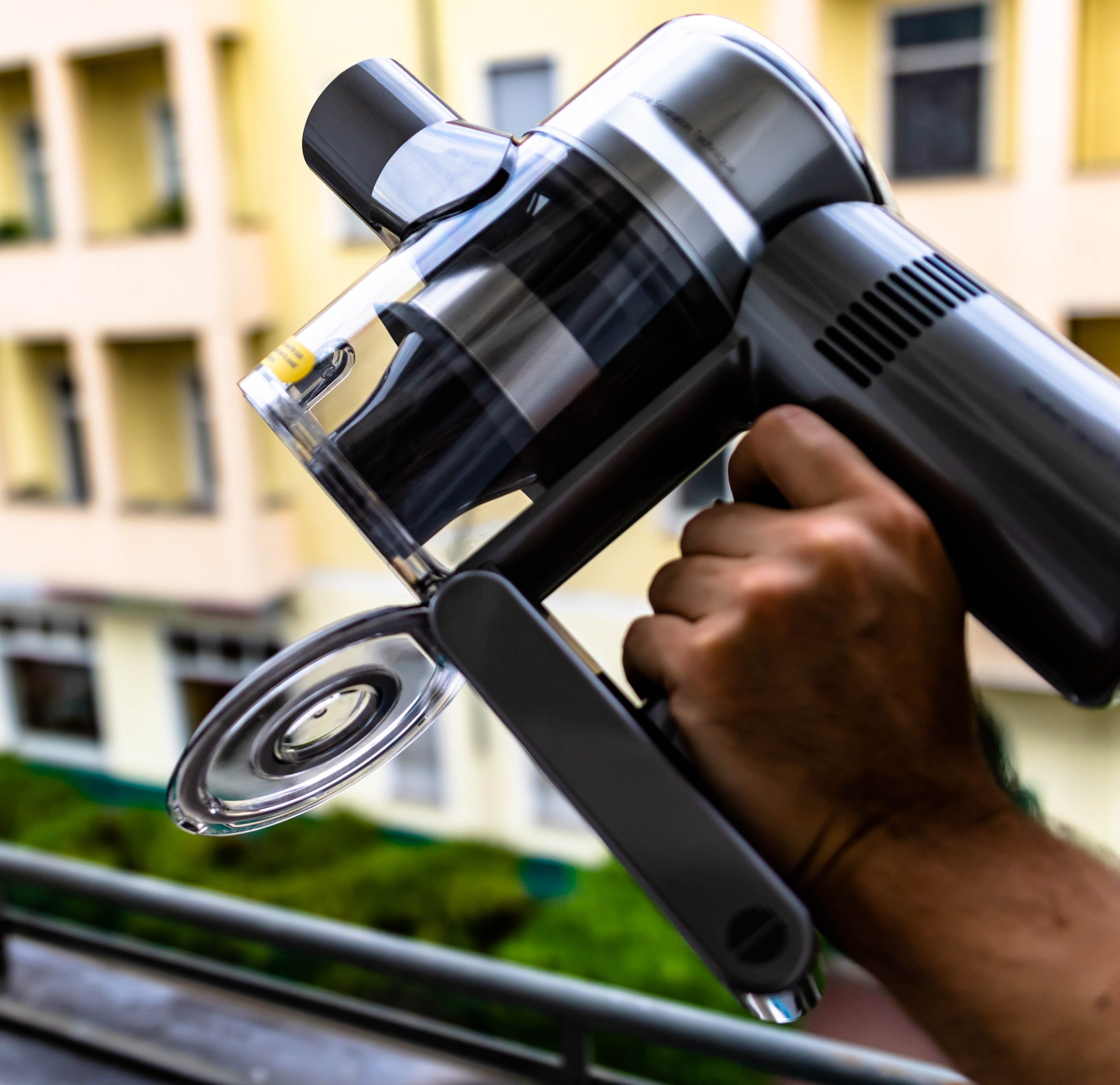 Both Dreame vacuum cleaners also use a washable HEPA filter, which can be removed with a small turn of the Dreame logo. The same applies to the filter for dirt and hair on the underside – unscrew it once and you can easily clean it. 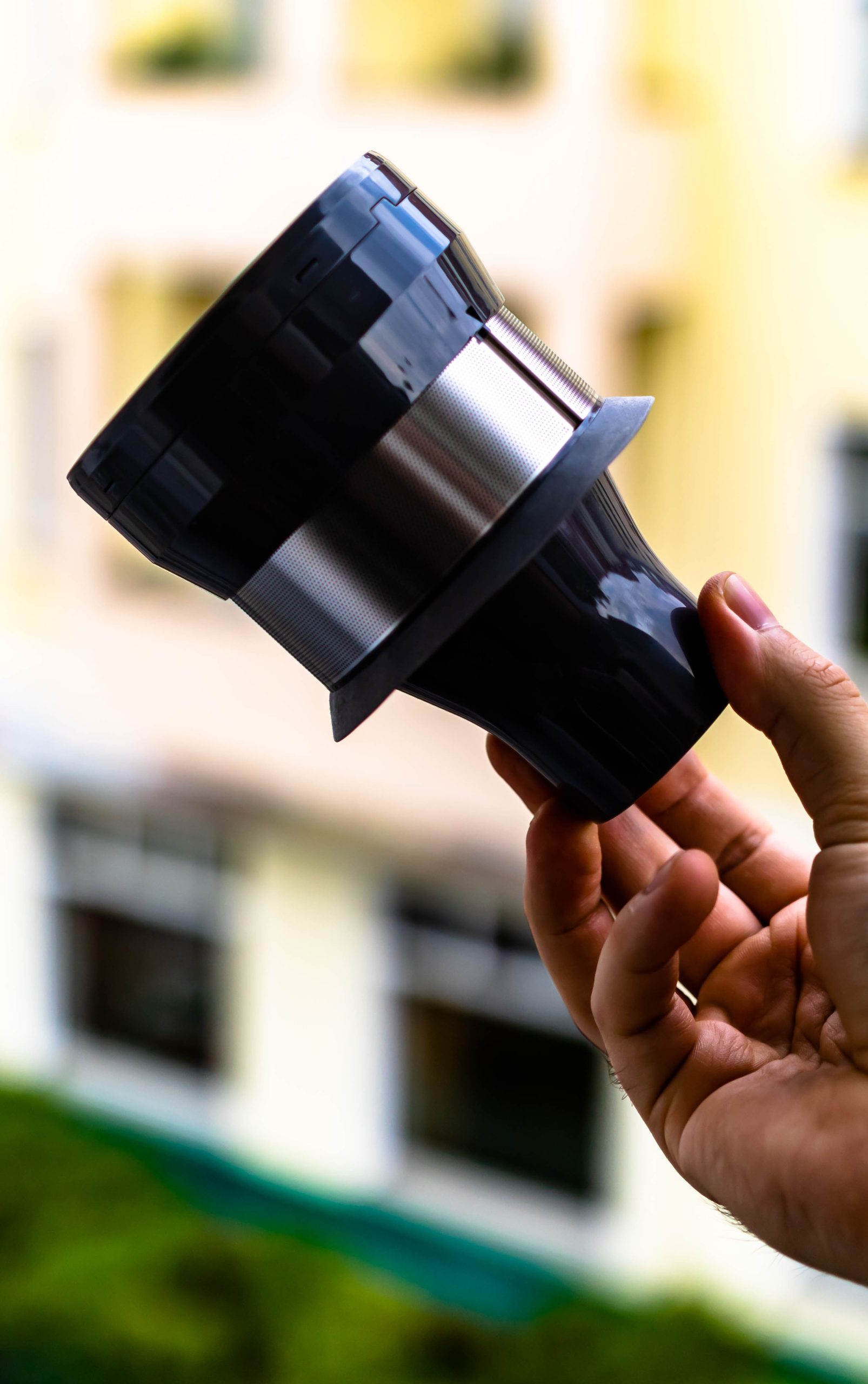 Both Dreame vacuum cleaners each come with a docking station. It can be installed on the wall and, when the power pack is connected, it can also be charged directly there. Alternatively, you can also charge the handpiece yourself. However, the docking station also offers the advantage that three accessories can be clicked in there. If you now have a wild mixture of runners and hard floors at home, it should also be said that the Dreame V12 Pro has a function that the normal V12 does not yet have – the automatic suction power boost. In Auto mode, the V12 Pro increases the suction power for carpets and fabric covers by itself. It actually works quite well, but it doesn’t change anything fundamentally. 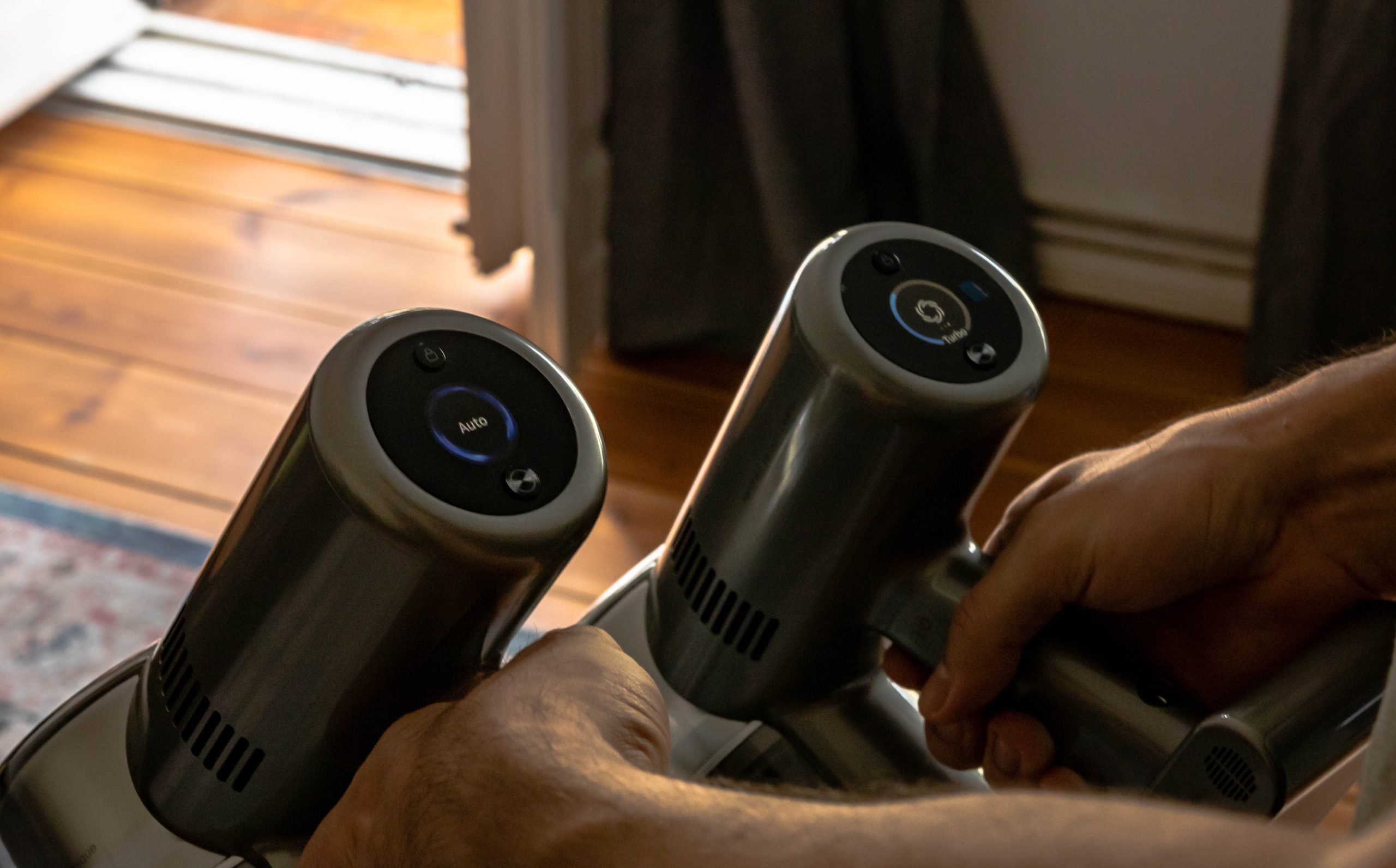 Incidentally, I have to compliment Dreame on the runtime – the information is absolutely precise. In normal operation, both devices stop working after 30 minutes. This is enough to completely vacuum most homes once. In Eco mode, the Dreame V12 is actually a few minutes longer. But you have to decide for yourself whether a minute more or less running time with the turbo is decisive for the war. I do not think so. 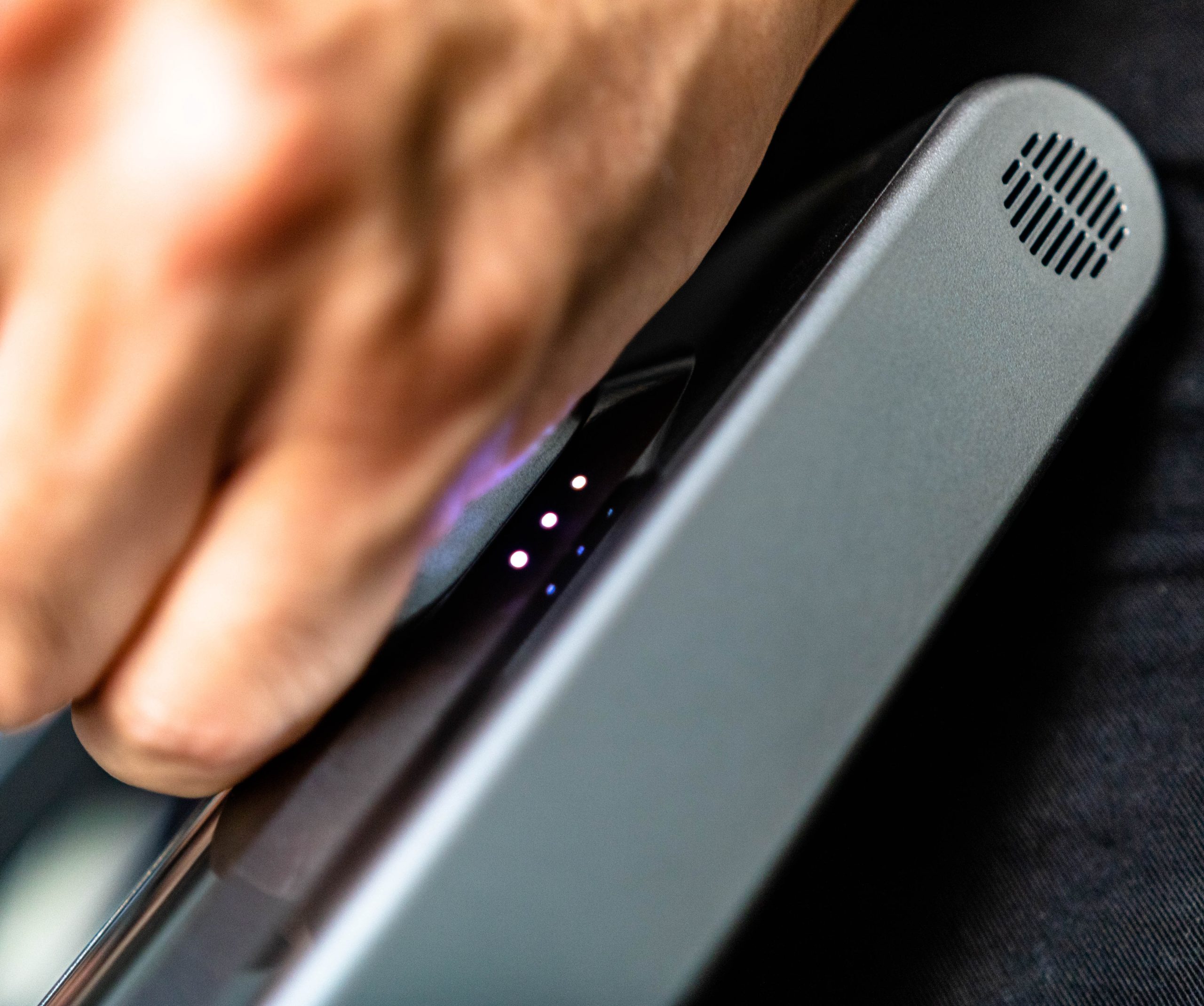 Unfortunately, the battery on both devices cannot be easily replaced. It’s a shame because these types of devices are often used until they’re empty and then stay in the charging station for a longer period of time. With a little manual skill, however, it is possible to change the battery of both the Dreame V12 and the Dreame V12 Pro. Replacement batteries can be found online for €50-60 (+ postage).

I’m sensitive to this issue – simply because I don’t want to wear ANC headphones just because my vacuum cleaner thinks it must be annoying. But there is an all-clear for both Dreame devices – it’s okay.

Of course, neither the Dreame V12 nor the V12 Pro are whisper-quiet, but with less than 80dB it is still a tolerable level. Interestingly, the V12 Pro tends to make a slight whistling noise that the regular V12 doesn’t have.

Dyson V12 Detect Slim Review : As Effective As It Is Light | Tech Reviews

The question of which of the two cordless vacuum cleaners suits you better depends on your floors. If you have a lot of carpets with long fibers, it makes sense to use the Dreame V12 Pro – this also applies to pet owners. The increased suction power can be better utilized in such situations. 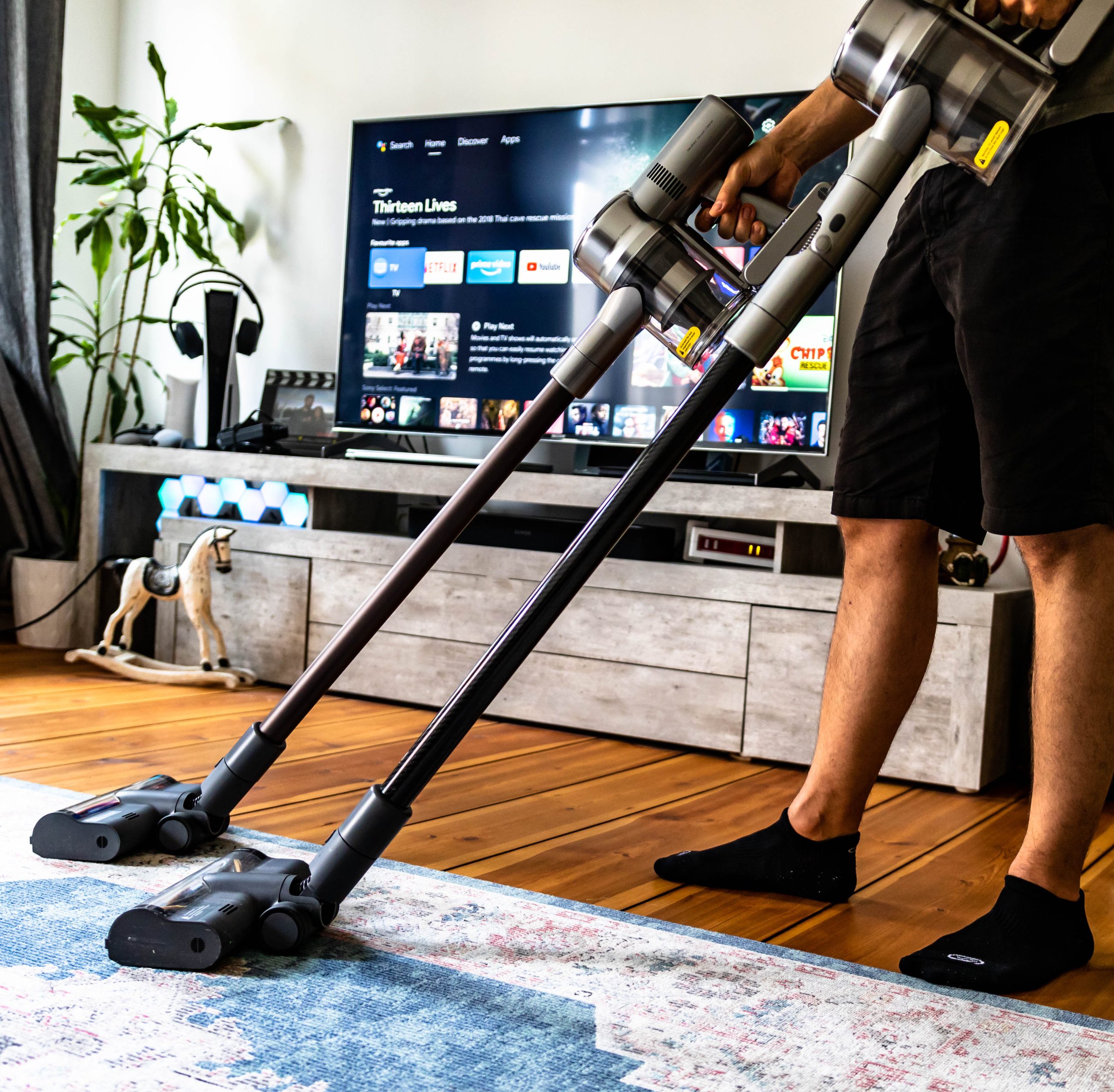 The Dreame V12 is perfectly adequate for normal hard floors and carpets with a fiber length of less than 1.5 cm (short-pile carpet). The slightly longer battery life of the Dreame V12 also speaks for it. So most users can safely save 30% and don’t have to worry about missing out on an important feature.

- Advertisement -
Share
Facebook
Twitter
Pinterest
WhatsApp
Previous articleOnly 6 euros: these Xiaomi headphones are a scandal
Next articleThese 3 wireless headphones can be yours for less than 30 euros
Hocainehttps://fadvices.com
A full time tech enthusiast with a passion for writing. Religiously follow everything new happening in the tech world and share my two cents with my audience here.
RELATED ARTICLES
Tech

At Fadvices we provide you the information gathered from different resources about the tech Industry. We do not own any images or content shared on the website unless we declare that we have copyright in the image or content. If you find anything copyrighted on the site, please contact us at fadvicess[email protected].