Honor has started its smartphone strategy less than a year ago, and has been able to take advantage of the regional market’s interest in the mid-range. With the X line , the former Huawei brand aims to stay relevant in a segment that does not forgive absences. How much is the Honor X9 worth? This is our opinion.

Honor X9: A design inspired by the Magic 4

At first glance, the visual impact falls on the circular arrangement of cameras on the back that emulates the “eye of the muse” that the Magic 4 Pro has – whose review we are already working on – and which is accompanied by an LED flash on the back. higher.

Beyond that, it is a team with a shiny plastic finish for the back cover and a less reflective one for the sides. Speaking of the sides, the volume buttons and the fingerprint sensor that works as a lock button are integrated on the left.

On the lower edge, the USB-C port, the only speaker of the equipment and the dual nanoSIM tray are incorporated. It is a team that adds striking details to the final design, but that adapts to the construction trend of the mid-range.

Honor X9: A screen without surprises

We are facing a 90 hertz IPS and FullHD + resolution, which optimizes warm tones well for a better content display. It is a large screen, and that does not escape the thick lower edge as opposed to the front lens, located in the middle of the upper part.

One issue with the screen is tactile feedback, an execution that appears to be inconsistent with the fluidity of the panel. At times, it feels like the screen doesn’t respond to touches or navigation gestures at first, and we have to reiterate the request once again.

However, in brightness and viewing angles the issue is resolved in favor of the X9, as there are no complaints on that point. It is an IPS panel that translates color very well.

I’m not going to brown the pill on this one. Magic UI 4.2 is an interface that screams “EMUI” at all times: transitions, access design, navigation gestures, menu order, color of system icons, number of icons in the app box. It is that, EMUI with Google Mobile Services.

That’s not bad. And I say this for a reason: it is a simple and familiar experience, which adds confidence to the user who jumps from a “mid-range” Huawei to Honor due to the presence of Google; and that, without a doubt, expects the least amount of friction possible.

I already talked about this software in the Honor 50 review, and it is the same as what we saw in that version. I recommend you read that review and the others of the brand so that you have a clear look at Magic UI.

Well, it’s a complex subject. We have a four-camera array on the back that supports the 64 MP main sensor, which, by the way, does almost all the work in different conditions, except for night photos without the “Night Mode” algorithm.

The wide-angle lens seems to be rendering with low detail, an issue that is accentuated at night due to the lack of intervention of this lens in the team’s “Night Mode”. Incidentally, the counter of “Night Mode” can go up to 5 seconds.

2 MP macro and 2 MP ToF work as expected: no quality and no need.

The 16 MP front lens is, together with the 64 MP sensor, the best of the team when it comes to photography. Good registration, good blur algorithm and good color reproduction. For the night, however, it is not enough.

The maximum possible video record is 1080 at 30 fps, a limitation that other brands, in that price range, are able to face with 60 fps or, failing that, 4K. We don’t have that here. Only the main lens and the front lens stand out. The rest are just wiggle room. 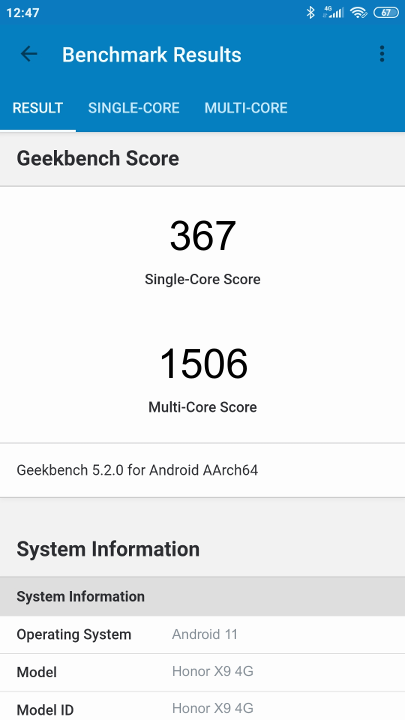 The issue with this X9 is that it doesn’t feel fluid, and that we have 8GB of RAM and two extra gigabytes virtualized. Surely, between the Snapdragon 680 4G processor and the speed of the internal eMMC storage, the bottleneck emerges. This, added to the low tactile response, impairs the user experience.

Note that I installed the basics that I always add to a phone: no games, a lot of multimedia. text and photo editing Nothing super human to challenge him, and he hangs around a bit at the start.

For multimedia, we are somewhat limited with the quality of the panel and the output of the lone speaker on the base, unless you use TWS or Bluetooth headphones. In the case of biometrics, both the fingerprint sensor and facial recognition performed outstandingly for the category.

With its 4800 mAh and 66w fast charging, this Honor X9 leaves behind several in the segment, and we can add more benefits on this topic with the screen at only 90 hertz and 4G connectivity. Almost 7 hours of screen time and a reserve of 25% at night, which charge to 100 in 50 minutes, although the charging speed boost reaches its maximum in half an hour with 84% of the battery completed.

In the general balance, this team stands out for software, autonomy and design, but loses a bit in definition of cameras and hardware performance, including the screen. Compared to the X8, for example, there is no big difference and there seems to be no argument to go for that model. Honor has to give a little more if it wants the saturated mid-range to tilt in its favor. Especially at that price.