With Apple it is clear that one never knows very well what is going to happen. A renewal of the basic iPad was expected and in that aspect Apple has not disappointed.

The new iPad (2022) is nothing like the basic iPad we all have in mind. Neither by screen, nor by possibilities, much less by price. We have a new basic iPad but along the way we have found that we have also lost the basic iPad.

This redesign was more than necessary

At a pace that for some is being excessively slow, Apple has been modifying the design of its family of tablets until reaching the most modest of all: the basic iPad.

After many years, it’s time to say goodbye to one of the symbols of the iPad: the Home button

Now the new iPad (2002) is practically an iPad Air with less packaging. There was no other possibility if the start button was removed. With this act, the frames are reduced and therefore there is an increase in the screen diagonal, which is now 10.9 inches. 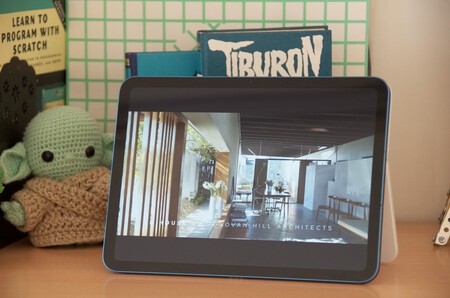 What remains the same is the pixel density and the image quality of the panel, something that is a maximum in the Apple iPad regardless of the range in which we move. 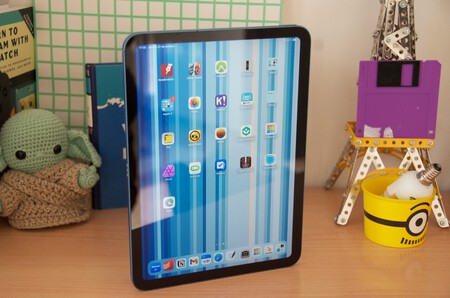 But logically in this input iPad there are limitations around brightness, reflections and most importantly, in the non-full lamination of the screen , so neither the display is as clean as on higher iPads nor the experience with the Pencil is as transparent or the touch on the panel so nice. 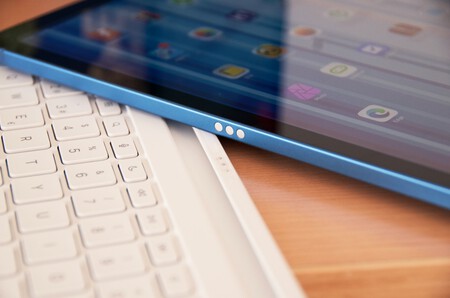 The removal of the physical home button on the bottom frame makes changes to the way you interact with the iPad. But it was what it was. Thus, now the TouchID fingerprint reader is located on the side start button . Here we would have already expected the jump to identification by FaceID and not stay a bit in no man’s land.

In any case, TouchID on the home button continues to work correctly and quickly even if we prefer other identification methods.

This is exactly what we have to talk about now. A novelty of this Apple iPad is in the placement of the front camera , which happens to be located on the side, so that the idea behind that this iPad is more designed to be used in landscape mode than ever is accentuated. At least for video calls, the main use of this camera, this new placement makes all the sense in the world because it is more natural.

The front camera is now located in a position that invites you to use the iPad in landscape mode. There is a change of cycle

To finish the aesthetic news section, the color comes to the new iPad , so you can choose between the classic silver and the new yellow, blue and pink as tones for your Apple tablet. 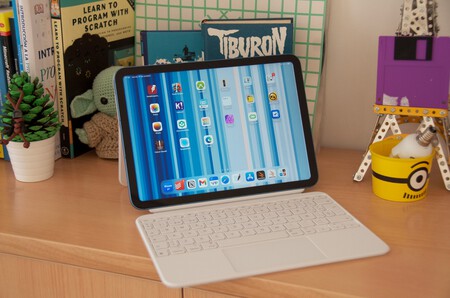 Another change in the design of the Apple iPad is in the charging connector. Say goodbye to the Lighting port and move on to a very welcome USB-C except for a small? detail that we will talk about shortly. Yes, as you may have imagined it is the pencil. 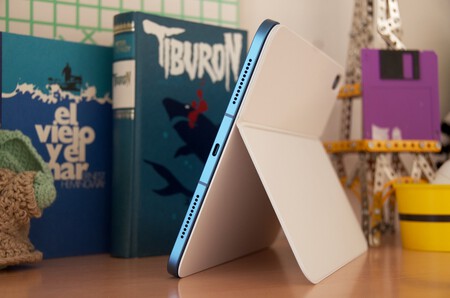 In addition to the charging port, the connector for keyboards and other accessories plays in the major league and is placed on the side, offering more possibilities that fit perfectly with the greater maturity of this equipment.

The accessories: one of lime and another of sand

Something that has been growing along with the price of the basic iPad has been the ecosystem of accessories that increase the performance of the tablet.

The new basic iPad arrives on the market accompanied by a keyboard with a touchpad that, surprisingly, separates from its “other” protective part. It is difficult to decide if I like this possibility better or the one with the previous cover. 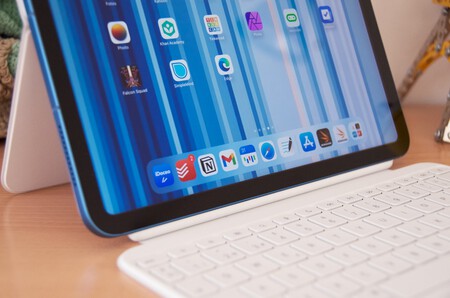 On the one hand, I like that in this type of iPad the keyboard can be removed and it does not bother when I want to view content comfortably but maintain some protection. But on the other hand, the execution seems to me much less successful than that of the iPad Pro keyboard, for example.

The “official” keyboard of the new basic iPad is better but more expensive, with two separate parts and still unreliable to use away from a solid table

Another novelty of this keyboard is the inclusion of a row of function keys. Is a version of Mac for tablets closer than ever?

Enjoying this new keyboard-cover doesn’t come cheap. 299 euros is an outrage for an accessory that wants to complement an entry-level tablet. But its quality when working with the touchpad or the comfort and reliability of the keys is not in doubt. 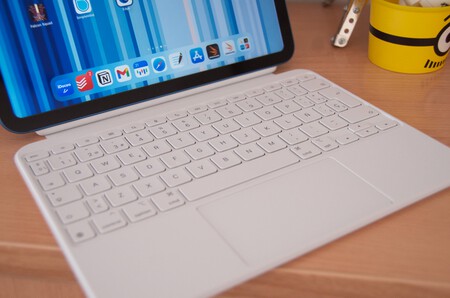 The other great iPad accessory does not come without controversy either. And in this case it is crack. Incomprehensibly, exclusive compatibility with the first generation Pencil is maintained , which entails that synchronization and charging can only be done via the Lighting port.

Apple solves it in its own way: adapter so that, at least, the ridiculous connection mode by clicking the pencil to the port is now managed with a cable in between. And without being able to use it in the meantime.

More of the same for Apple is enough

The interior of the new Apple iPad does not have many surprises. Being the input iPad, it was logical to expect it to stay with an A14 Bionic processor. If we add that the basic model offers the, again and go…, ridiculous internal memory of 64 GB , it is not difficult to doubt the validity at the technical sheet level of this basic iPad if we compare it with an Air or even the model of the previous generation. There’s not much real justification for the hefty price increase. 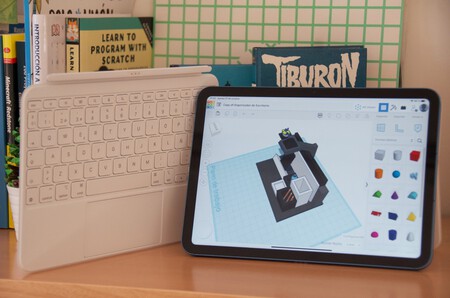 Having that veteran processor does not mean that we are missing power. Rather the opposite. The experience is completely fluid at all times , whether playing games, playing content or even editing video, an aspect that will be reinforced with powerful video editing solutions soon. 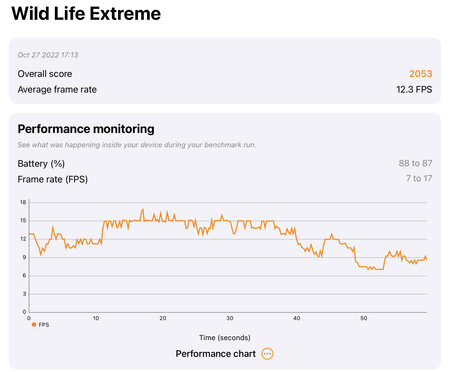 With data in hand, we have to talk about figures of 1577 and 3377 points in GeekBench 5 in the Single-Core and Multi-Core tests respectively. In 3Dmark Wild Life Extreme the new iPad reached 2053 points.

If we touch on the subject of software, the refrain sounds too much to us. There is more than enough power in this iPad for a software that does not seem to advance at the same pace as the inside of the devices but that is nevertheless more than enough so that, being sensible, the iPad is the most logical option for a tablet if you want make it more than just a consumer display. Imagine the scenario under Android.

It’s true that the pace of software improvement on the iPad is exasperating, but without real competition, Apple can afford it.

With all the changes, something that remains unchanged is the assurance that the 9-10 hours of real use with the new iPad we continue to have if its use is mixed. When we abuse the keyboard and tasks continuously, the average that we have obtained in our tests has been somewhat lower, around 7 hours.

It was seen coming for a couple of years but the departure of this new basic iPad has been the confirmation that it is increasingly difficult to understand where the iPad is traveling . The different families are barely delimited by price, characteristics and much less aspirations.

All this does not take away an iota of value from this new iPad, great again in terms of power, screen and versatility. But with decisions that are not understood more and more marked. 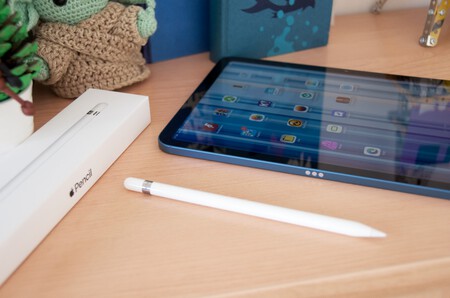 In the end, when you look at the complete catalog of Apple’s iPad range, you can’t help but think that the best thing about Apple’s new entry-level iPad is that the old model is still on sale.

- Advertisement -
Share
Facebook
Twitter
Pinterest
WhatsApp
Previous article
Chinese iPhone factory in lockdown raises wages for employees who stay
Next article
This is the Oppo A17 from 179 euros with brand new luxurious design
Hocainehttps://fadvices.com
A full time tech enthusiast with a passion for writing. Religiously follow everything new happening in the tech world and share my two cents with my audience here.
RELATED ARTICLES
Laptops/Tablets