Lenovo’s Legion notebooks have been popular with mobile gamers for years. We took a closer look at an interesting model with an Intel Core i7 and an Nvidia GeForce RTX 3050 Ti.

One of the most popular notebook series from Lenovo is “Legion”. These gaming notebooks usually offer good value for money and are therefore popular with gamers. The Lenovo Legion 5 82NL000RGE offers an attractive and unobtrusive black design, a 15.6-inch display with 120Hz, lots of connections and a strong cooling system.

An Intel Core i7-10750H, which is no longer quite fresh, works inside. With six physical cores and up to 5GHz Turbo, it still offers enough performance. There is also an Nvidia GeForce RTX 3050Ti with 4GB GDDR6 as a dedicated graphics card.

The notebook is powered by a 60Wh battery, which according to Lenovo should last for more than 6 hours. In terms of performance, the Legion 5 82NL000RGE is in the midfield. If you need and want more power, you can use one of the Pro models. Freshly unpacked and without any test runs, the Legion notebook makes a solid impression. Let’s see if this is still the case after the extensive tests.
Table of Contents 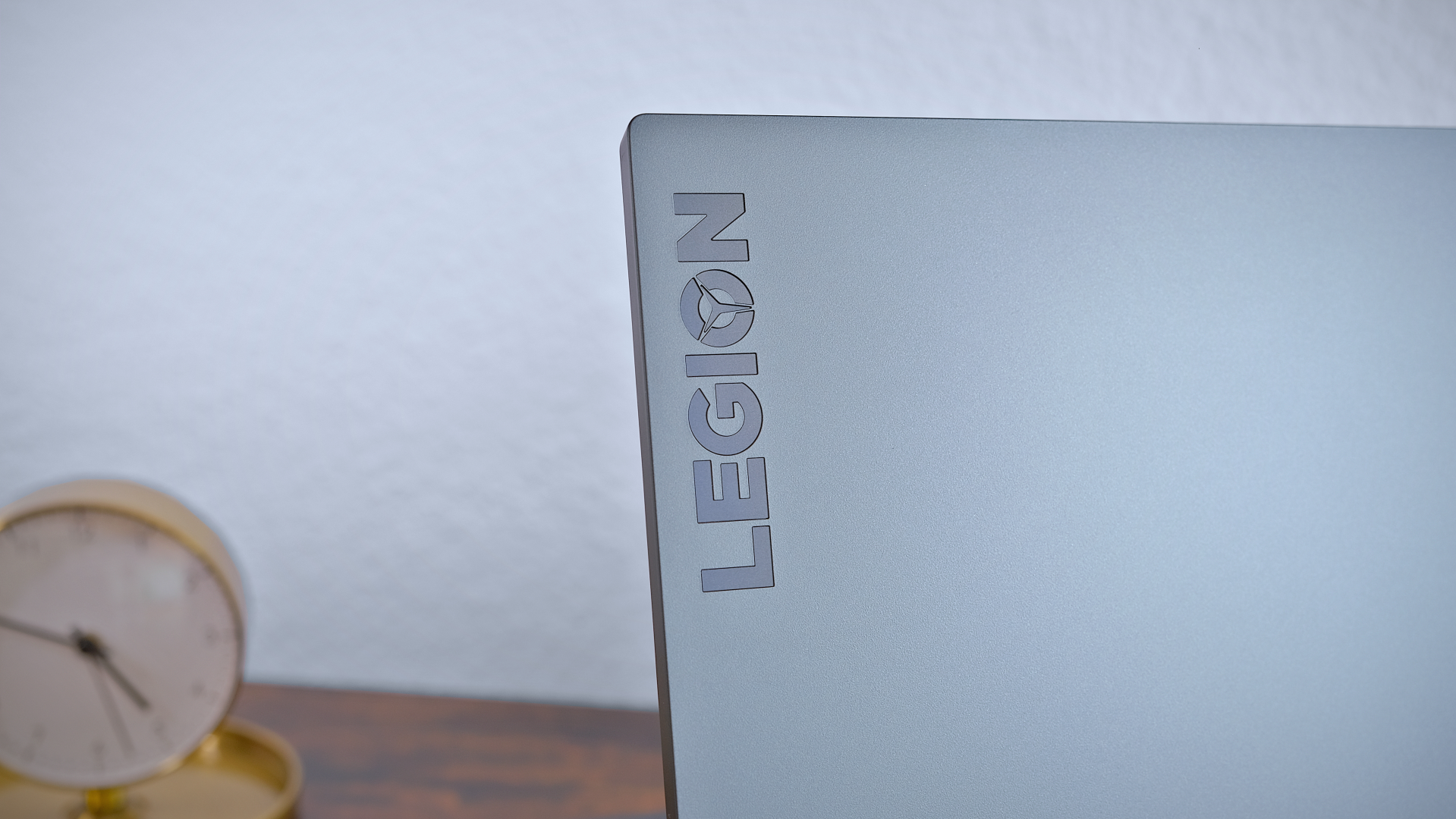 The scope of delivery is manageable: the notebook, a thick 230 watt charger with a long cable, and the usual paperwork (quick start guide, warranty card). Lenovo offers a two-year limited warranty and workshop service. There is a one year guarantee on the battery.

The design of the Legion 5 offers clean lines and looks positively understated. The entire case is finished in matte gray and black tones, the hinge has an interesting space effect and changes color a bit depending on the viewing angle. Lenovo calls it “light-refracting chameleon hinge”. A silver Lenovo logo and Legion lettering on the back breaks the minimalism a bit. 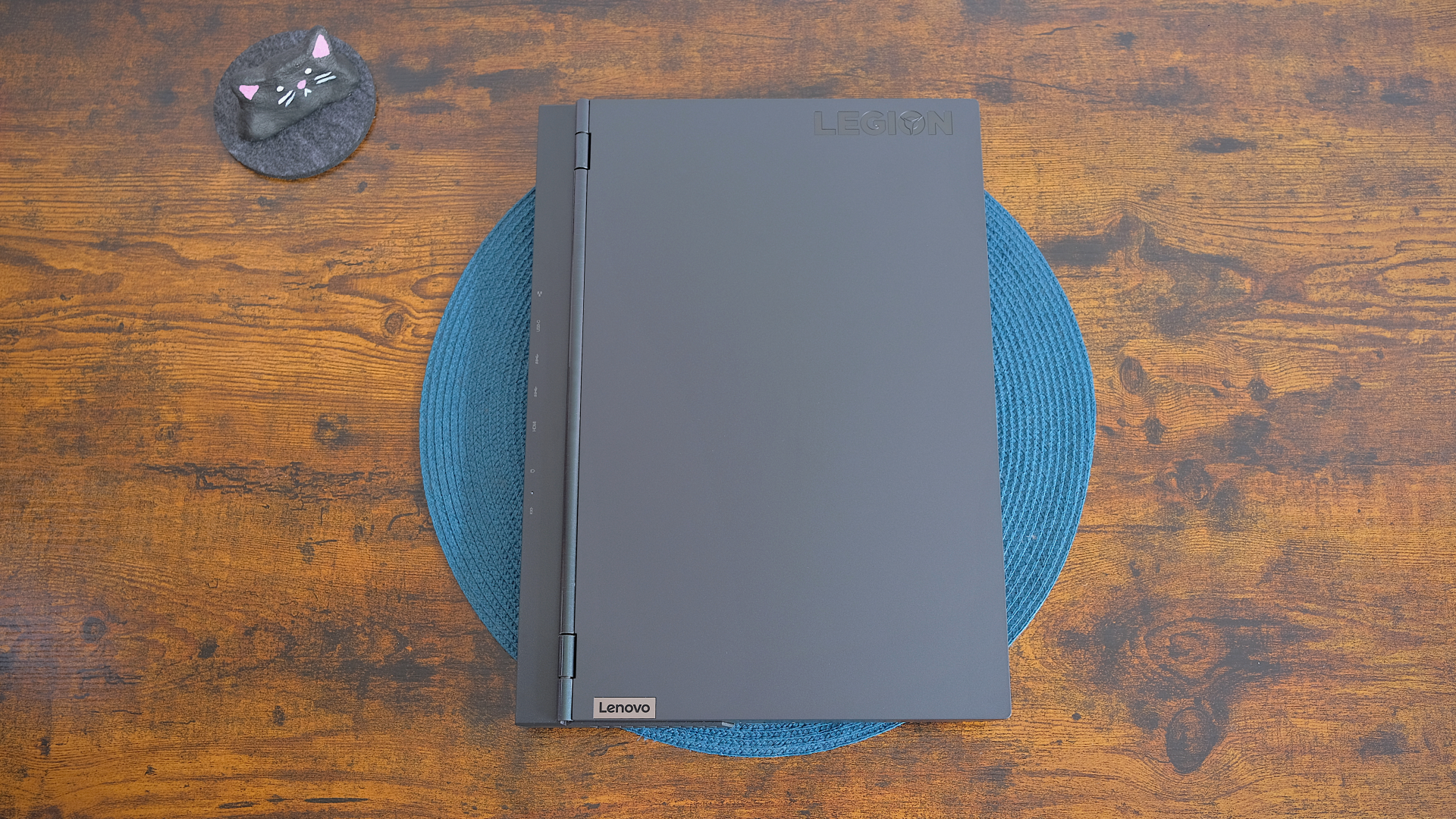 Although the Legion 5 is mostly made of plastic, it is robust and looks classy. Fingerprints and dust are well hidden. Lenovo calls the material used “dirt-repellent polymer talc”.

One design element that I particularly like is difficult to describe in words. The display isn’t attached to the back end of the notebook; behind the hinge there is another area with a status LED and a few labels. Because most of the connections of the notebook can be found on the back. This means that there are not unnecessarily many cables in the way. The Legion 5 still looks tidy even with many connected devices and cables, since the cables exit at the back.

<<Played: Apex Legends Mobile – the slimmed down original for on the go>> The Lenovo Legion 5 is slightly larger than its 15.6-inch display. With its 36.31 x 26.00 x 2.61 cm, it should just about fit into a notebook backpack. However, it is too big for most lifestyle bags and backpacks. At 2.30 kg, the weight is also slightly higher than most notebooks. But since this is a gaming notebook and a desktop replacement, it’s okay. But keep it in mind if you want to travel longer with it.

The processing is at a high level and should stand the test of time well. Nothing creaks and the gap dimensions are perfect. The keyboard area is stable and can only be bent slightly with force.

The keyboard offers a crisp pressure point and seems almost mechanical, which I really like. The keys are not compressed either, but offer a lot of space. Typing texts like this review on it was a lot of fun. However, the coating of the individual keys is too smooth and rubbery for me. But that’s just a personal preference. 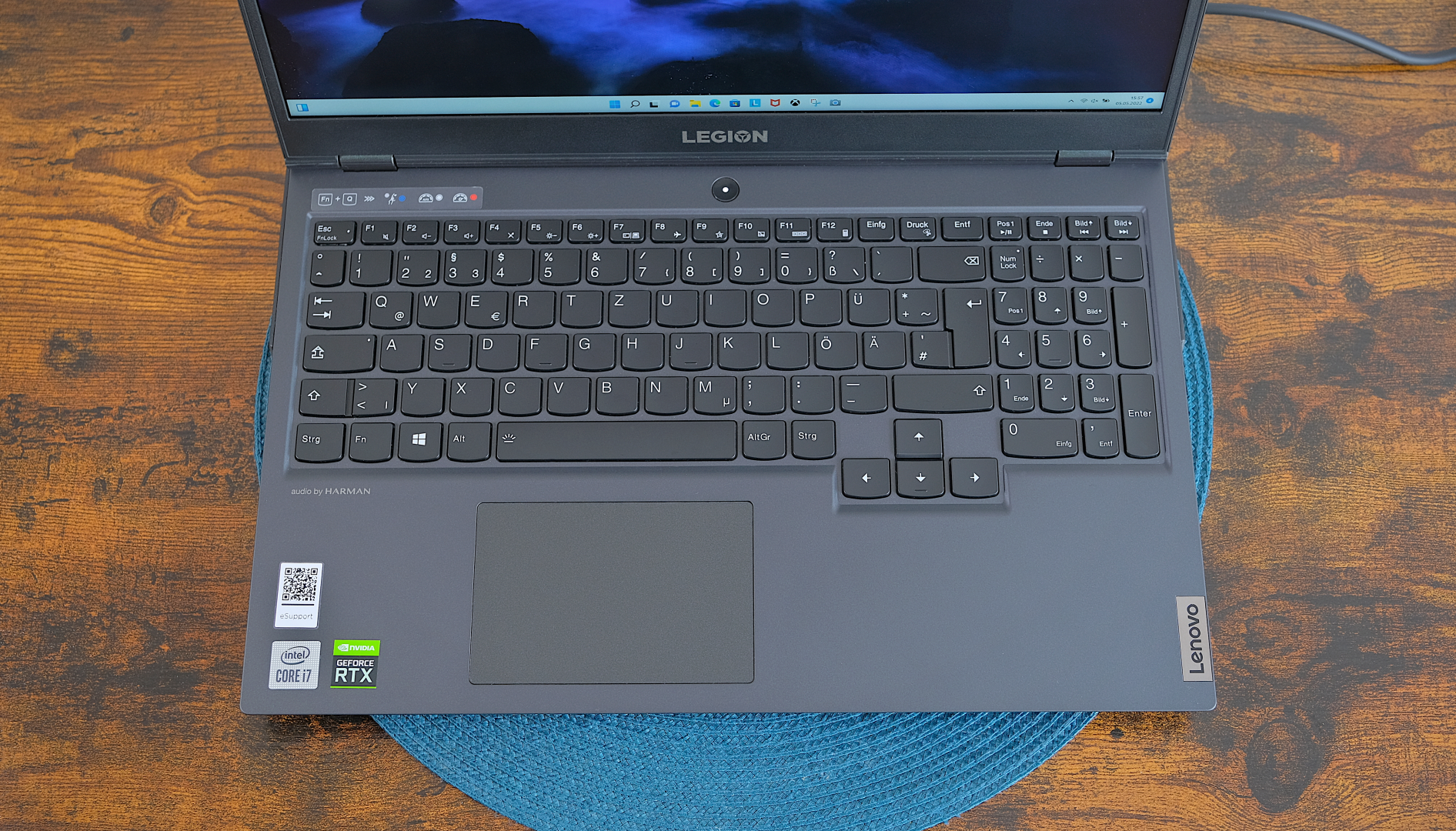 The multi-touch capable touchpad on the inside is slightly offset to the left. It always works unerringly and didn’t cause any problems. The power button is in the middle above the keyboard. Unfortunately, it does not also serve as a fingerprint sensor. Too bad, but just a small detail. 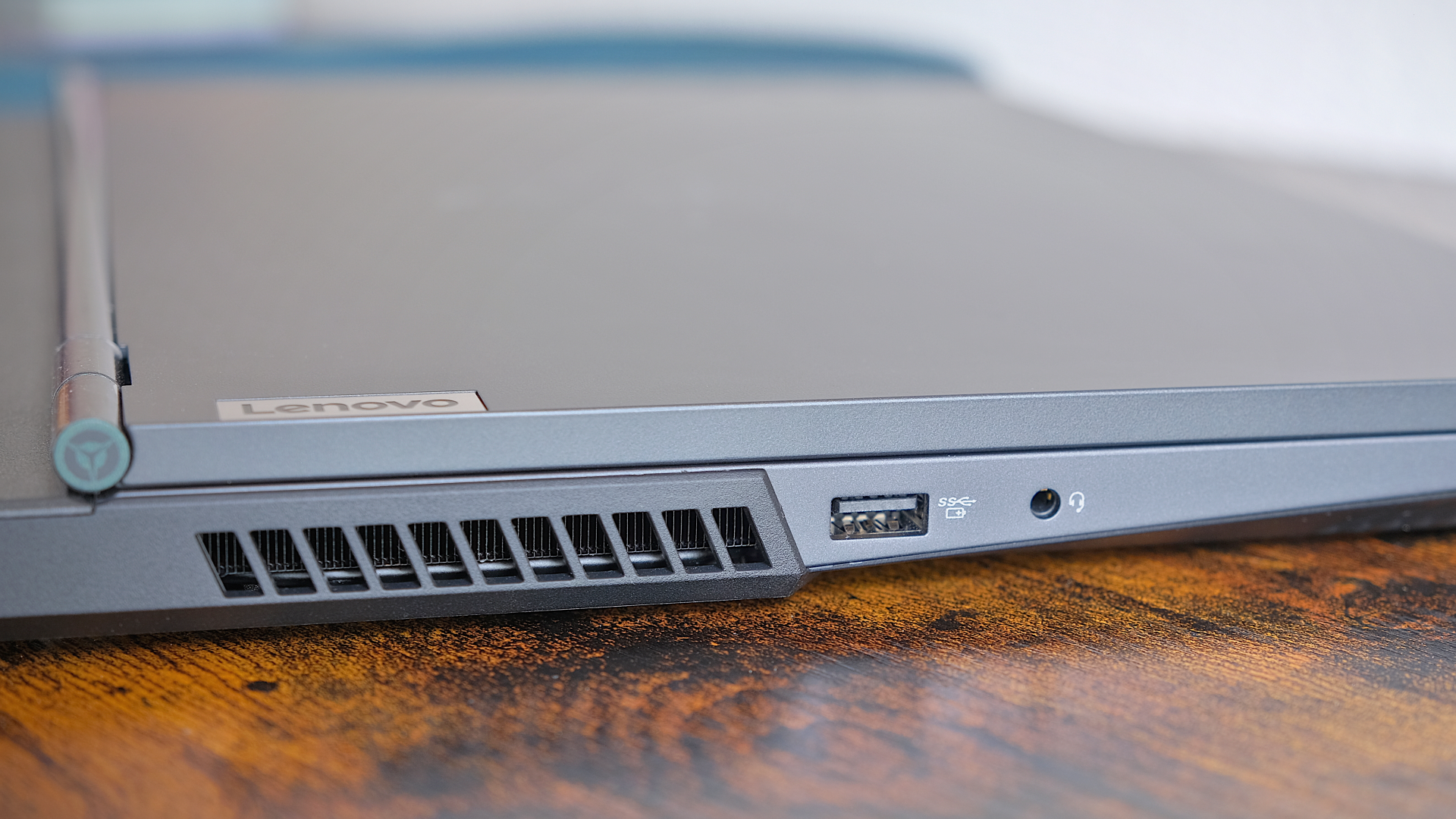 In addition to the physical connections, there is a WLAN chip from Intel with a Wi-Fi 6 dual antenna and Bluetooth 5.1.

Apart from an SD card reader, there is no connection of any rank and name missing. The selection and the modern standards are exemplary. 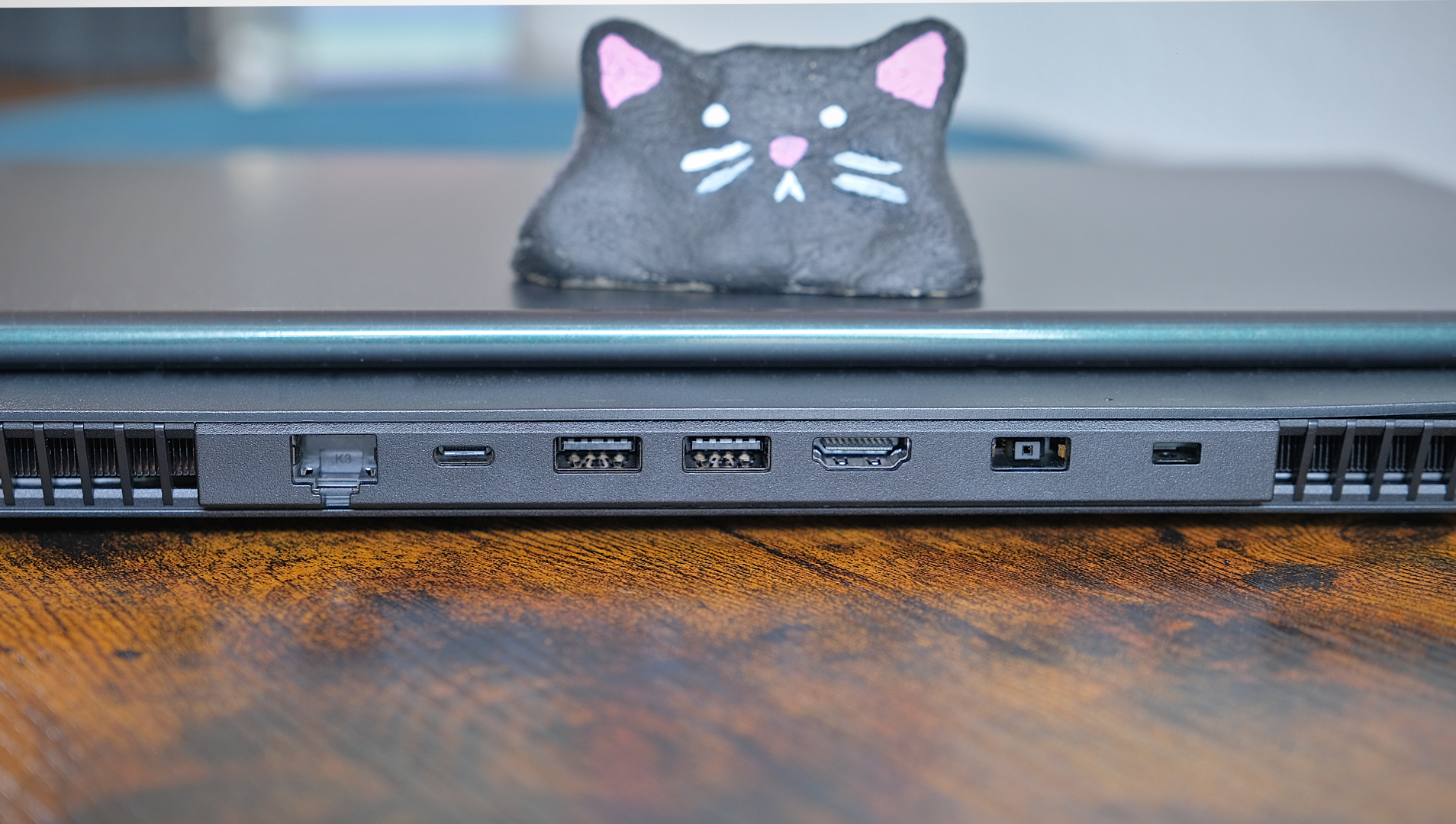 Lenovo offers a 15.6-inch IPS display with a Full HD resolution, 250 nits maximum brightness, 100 percent sRGB and 45 percent NTSC coverage. There is also a response time of 3ms. Since Lenovo does not specify whether this is GtG or MPRT, I assume GtG.
Before I start the measurement, here’s my first impression: the colors look natural and the FullHD resolution is completely sufficient. The 120Hz display makes the whole system appear pleasantly fluid. The maximum brightness is sufficient, but not particularly high. 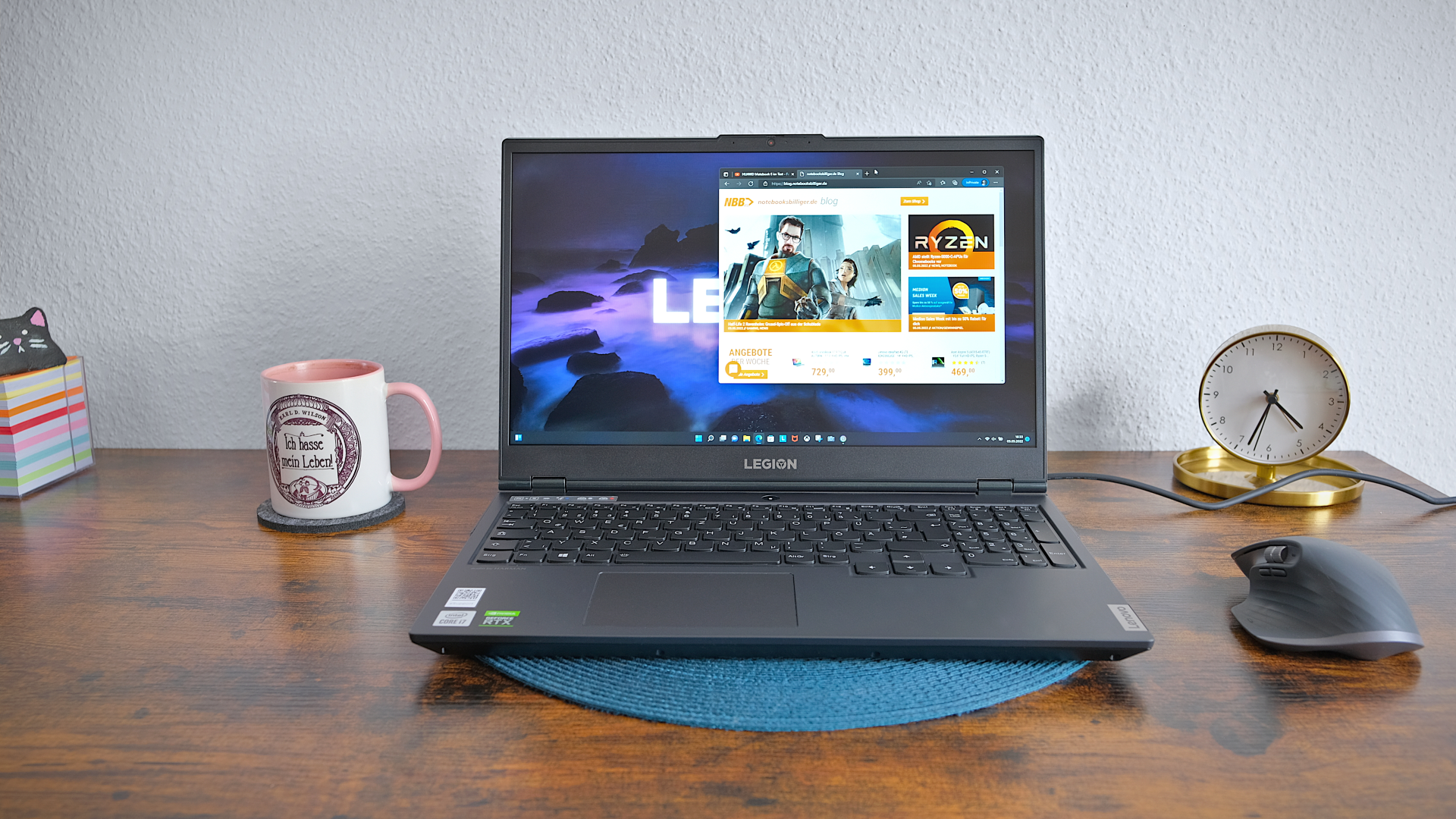 Of course, we don’t just rely on the impression, but measured the display with a professional Spyder. Maximum brightness is 273.4 nits (cd/m2) in the center of the screen and decreases towards the edges. For me, a value from 300 nits (cd/m²) is good, the higher it goes, the better. The official specification of 250 nits is therefore met and even exceeded. With this value, the display is something for indoors or shady places. Unfortunately, the display doesn’t really stand up to direct sunlight.

According to the Spyder5, the display has sRGB coverage of 63 percent, and AdobeRGB, which is important for many creative tasks, is covered at 47 percent. The P3 color space is also displayed at 47 percent. A contrast of 950:1 was measured. The color fidelity can be described as average in the state of delivery. It is enough for games and series. However, media professionals should use an external monitor. 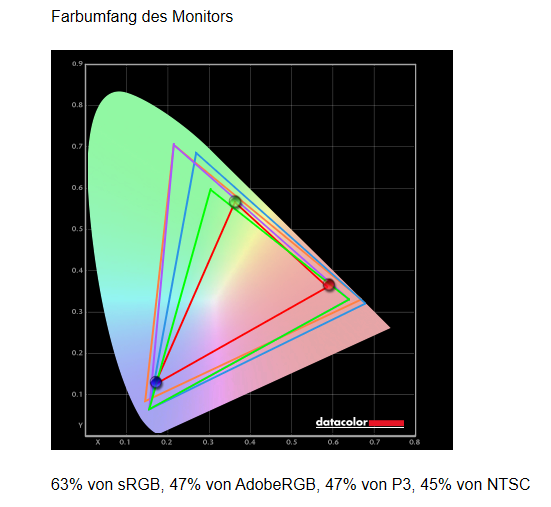 Then I calibrated the display: Nothing has changed in terms of the color spaces and contrast, but the mean value for color fidelity has improved from 2.33 to 0.99. The color fidelity could thus be significantly improved. A certain red and a blue tone stand out in particular. Even the subsequent calibration did not change anything.

I’ll be honest: the Intel Core i7-10750H (45 watt TDP) with six cores is no longer fresh. Intel has now reached the 12th generation of processors.
Nevertheless, the processor should still offer enough power for all imaginable games. This is mainly due to the high turbo clock of 5.0 GHz. There is also a current NVIDIA GeForce RTX 3050 Ti (4GB, 95 watt TGP) and a total of 16GB of fast DDR4 RAM. 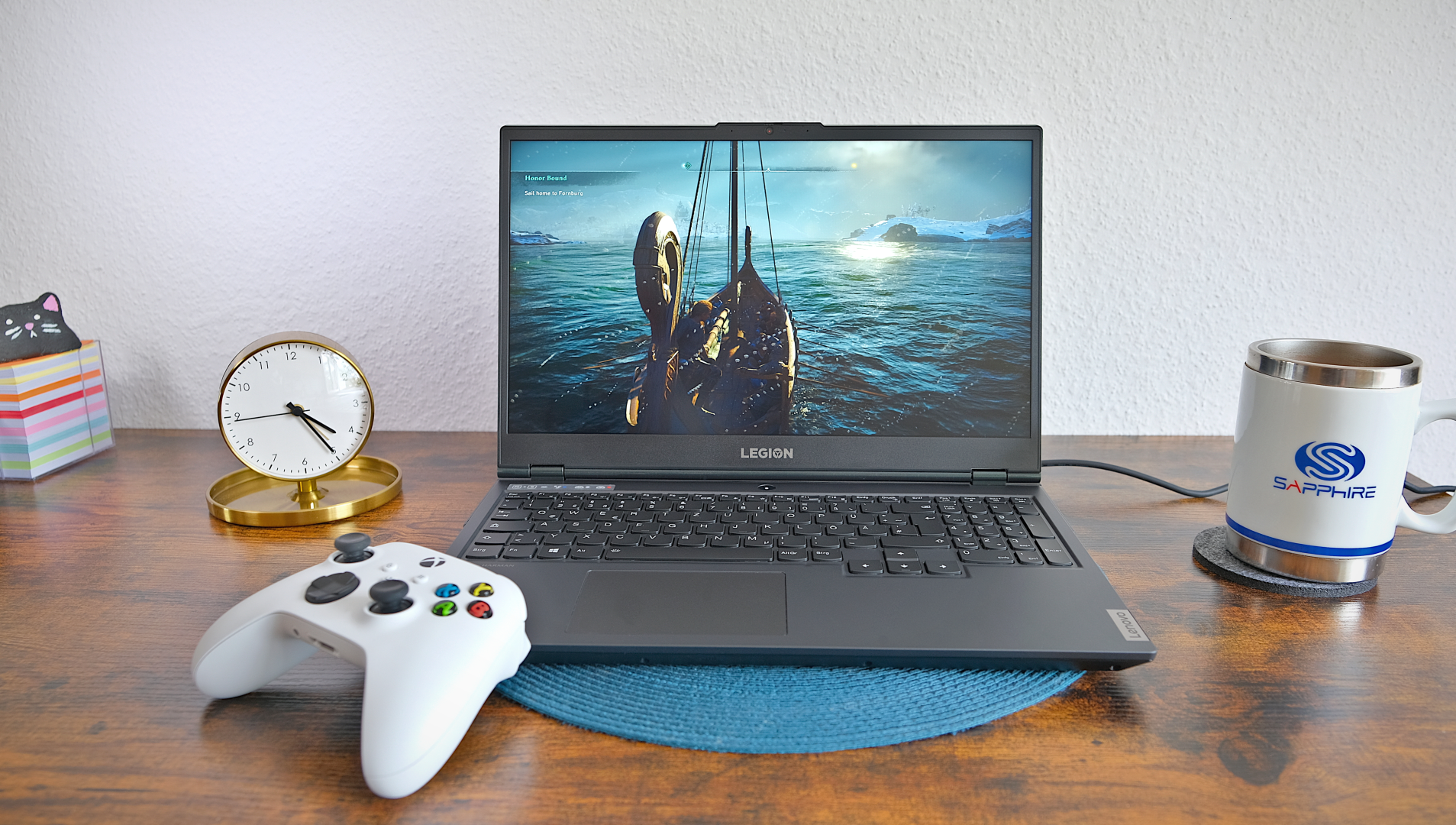 So let’s run the notebook through the benchmarks and look at the results together.

Probably the most famous e-sports title achieves a smooth 254.02 fps in our reality-based benchmark (scripted match with bots) in the highest settings. If you go down with the details or some effects, you will achieve more. 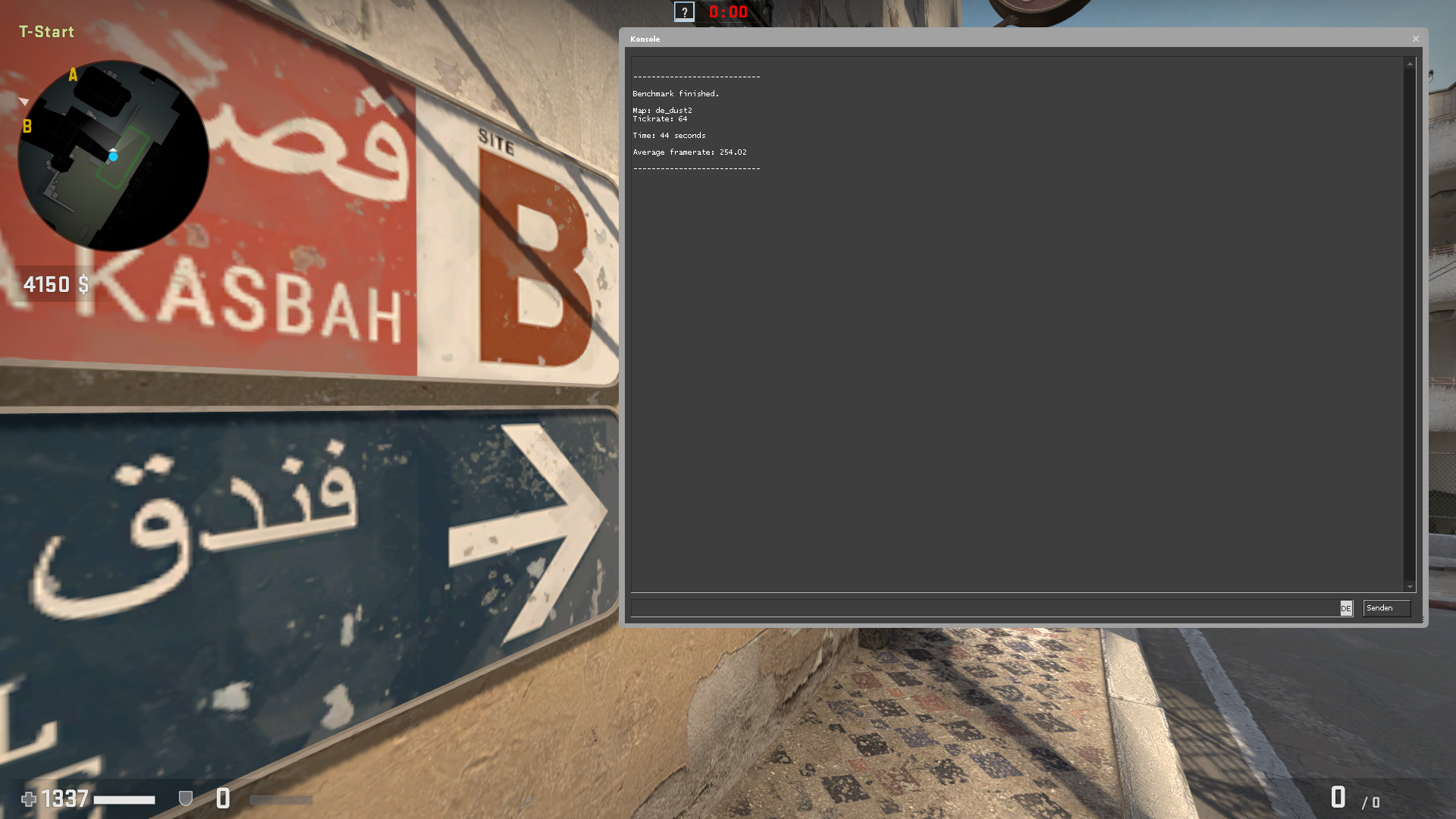 Gaming notebooks aren’t exactly known for their high endurance. Lenovo speaks of “more than 6 hours” of battery life. This doesn’t make a full work day possible, but it should be sufficient for most scenarios. The Lenovo Legion 5 has a 60Wh battery that can be quickly charged with 230 watts thanks to a lavish power supply unit. Lenovo states “from 0% to 50% in less than 30 minutes”.

To get realistic results, I observed the battery performance for days and tested it as follows: I turned the display brightness to around 80 percent, set the performance profile to “Balanced” and went through a normal working day with the WLAN connection active. The program was: surfing the Internet a lot and working in Office applications. The keyboard and trackpad were used continuously.

The entire notebook consumes an average of 13 watts when idling. As soon as some surfing and music are added, the consumption increases to around 29 watts. During my benchmark tests, I was able to measure a power peak of almost 186 watts.

During a typical working day, the battery died after around 5 hours and 28 minutes. Thus, the Lenovo does not quite reach the expected six hours. Of course, the battery life depends a lot on the programs you use, screen brightness and other things. It is therefore quite possible to get over the 6 hour mark with it.

Last but not least: The thick 230-watt power adapter is a bit impractical, but charges the notebook to 100 percent in just under 83 minutes. That’s fixed!

- Advertisement -
Share
Facebook
Twitter
Pinterest
WhatsApp
Previous articlePlayed: Apex Legends Mobile – the slimmed down original for on the go
Next articleASUS Vivobook 17 Review – Large Notebook with many Ports
Hocainehttps://fadvices.com
A full time tech enthusiast with a passion for writing. Religiously follow everything new happening in the tech world and share my two cents with my audience here.
RELATED ARTICLES
Reviews

Suunto 9 Peak Pro Review : A Smartwatch? Sports-watch Who Stands Out When Others Give Up | Tech Reviews