Logitech, and the MX series in particular is hard to imagine in offices. The MX Master has been my daily companion since the first version and I also liked the MX Keys in the test. With the MX Keys Mini there is now a smaller version for everyone who likes it even more compact. Let’s see how it fares in everyday life.

The scope of delivery is relatively unspectacular, as is the design. Keyboard and a USB-C cable are included, that’s it. If you still use older Logitech products and rely on the Unifying receiver: The MX Keys Mini is not compatible with it! My test therefore comes a little later, because first a new Logitech Bolt receiver had to be found. Alternatively, Bluetooth can also simply be used if it is available in the PC/notebook. By the way, the layout is equally suitable for Mac and Windows users. Special keys such as “Start” and “Alt” on Windows then act as “opt” and “cmd” on a Mac. Certainly pleasant for users who wander between the two worlds. However: Since the Fn key is one more key, I don’t always hit the start key right away.

The MX Keys Mini is powered by an integrated battery that is charged via USB Type C. According to Logitech, the MX Keys Mini should last up to 10 days, or up to 5 months if the backlight is deactivated. Depending on the settings you should be somewhere in between. 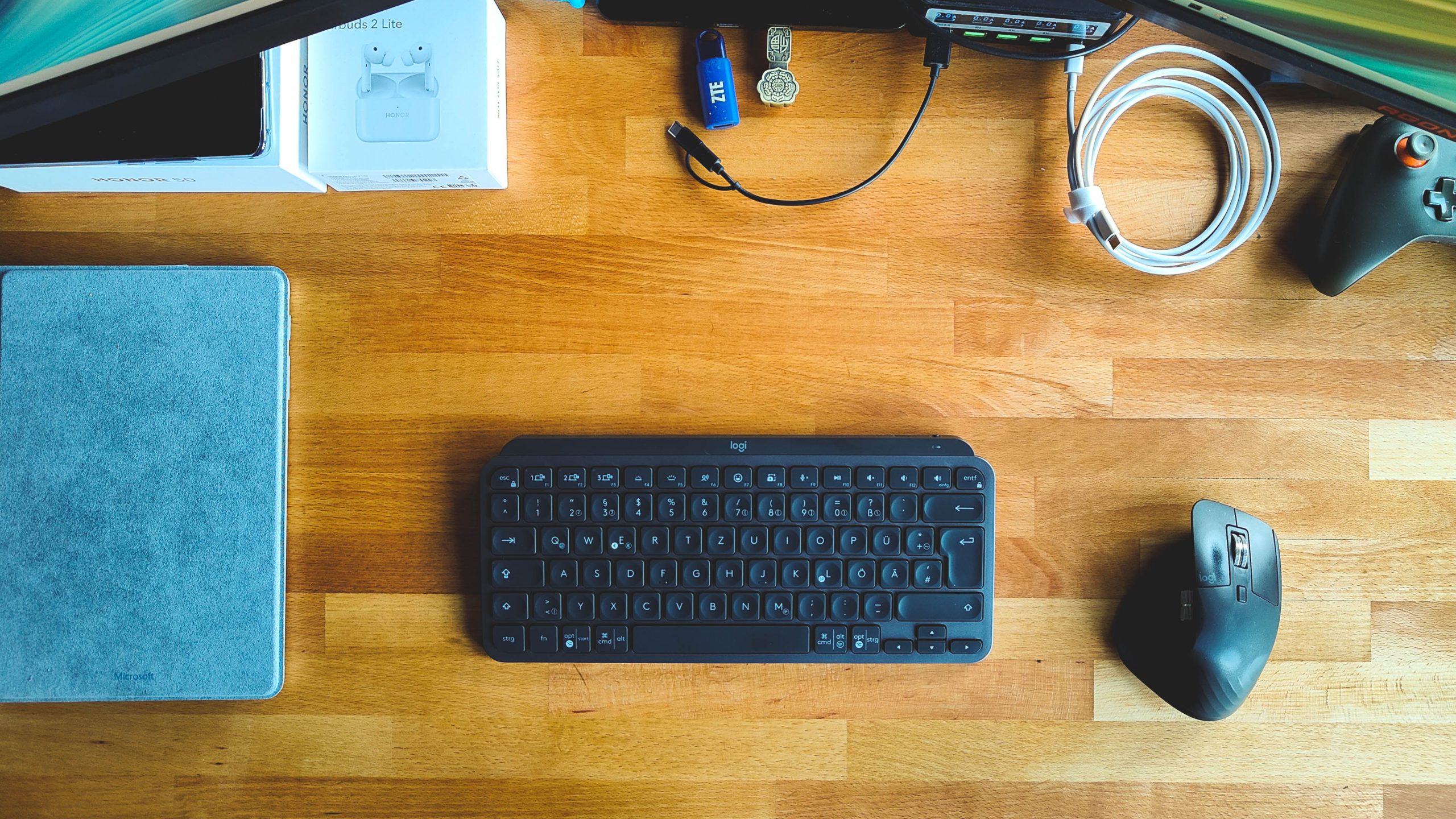 As is so often the case with Logitech, the keyboard layout takes a little getting used to. Due to the compact form factor, special keys such as “Page Up/Down” or “Home/End” are missing. This is really unusual for prolific writers and those who use these keys often should think carefully about the format. However, there is of course the big advantage that the MX Keys Mini is really compact and hardly takes up any space on the desk.

By default, the F-keys are assigned additional functions and multimedia keys. This can be used to connect new devices, regulate the brightness of the keyboard lighting, but also start special functions such as the emoji keyboard, a voice recorder, snipping tool or microphone mute.

Fortunately, the standard assignment can also be reversed so that the F keys also have their “normal” F1 to F12 assignment. At least in my everyday life I use the F-keys more often than the special keys.

The behavior can be adjusted via the key combination Fn+ESC or via the Logitech Options software. The software is kept relatively simple, at least compared to other solutions from the competition. As already mentioned, the primary assignment of the F-keys can be set here, but also significantly more. 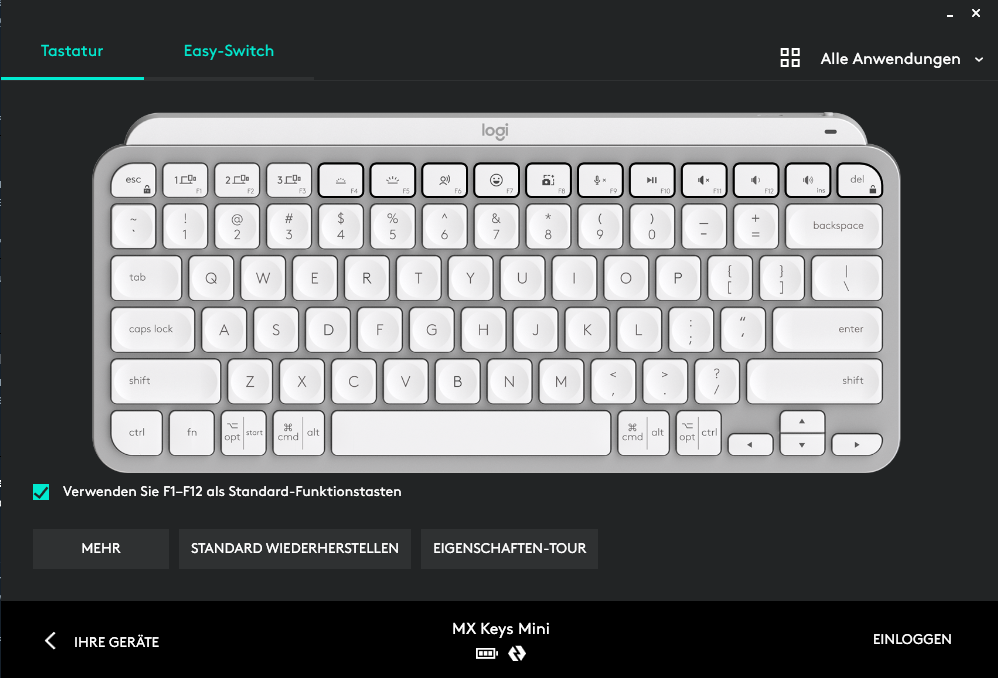 Be careful, DHL customers: Don’t fall for this scam

For example, the caps lock key, which I like to press accidentally, can be deactivated. However, this happens to me on every keyboard and therefore I welcome the function on every keyboard 😉. In addition, the “Easy-Switch” devices can be defined. Logitech understands this to mean coupled devices that you can switch between at the push of a button. There are 3 keys on the keyboard for this, which you can freely assign to coupled devices. Definitely useful if you frequently switch between devices.

You can also assign the special keys yourself. You don’t need a button for the online dictation function? Simply put a program, a Windows shortcut or your own key combination on it. A feature that I already celebrate with the MX Master. The whole thing is then also application-specific possible. You don’t always want to press Fn+F5 to update the shipment tracking in the browser, but don’t want to activate the Fn-Lock either? No problem – simply assign the F5 key accordingly for the browser. This allows a high degree of personalization and optimization to be achieved that hardly any other keyboard can match. Even if my example here is quite simple.

Logitech has also done a great job in terms of haptics. The keyboard itself feels solid and is very rigid. The bead at the top, in which the battery and radio technology are hidden, ensures the angle of inclination. The angle cannot be adjusted for this. The typing feel is beyond doubt and every key provides excellent feedback. The stroke is crisp, although the key travel is quite high for such a slim keyboard. Wrong entries are therefore rare, whether you have hit or not you can feel very clearly.

In addition, MX Keys Mini is pleasantly quiet and will not be a nuisance even in open-plan offices. Even if they will hopefully be a thing of the past soon. However, noise-sensitive users should definitely be happy about the dampened stroke. What bothers me a little is the automatism behind the backlight. There is no real automatic function, the brightness is set manually. The only exception: if the ambient light is very bright, the MX Keys Mini automatically switches off the lighting and you cannot activate it again. If you already have an ambient light sensor, then please fully automatic as an option in addition to manual. But that’s only a small thing in the end and should help the battery life a little.

For me, this is within the range of “10 days to 5 months” mentioned by Logitech, which is not that difficult now, measured by the large range of this specification. I definitely managed 10 days in the test, everything beyond that was very different and primarily dependent on the background lighting. Really accurate information is therefore difficult. However, since the keyboard can also be used once again while charging, it is not the end of the world if it is empty. Especially since it relies on USB, like most other devices now, you usually have a suitable charger at hand. Depending on the charger, enough can be recharged in just a few minutes to be able to continue using the keyboard for at least the rest of the day.

All in all I am very happy with what the MX Keys Mini offers. Of course, you have to be aware that the number pad is gone and some other special keys are simply missing to make the minimalist design possible. This is simply due to the form factor. If you can do without it, you get an excellent keyboard with the MX Keys Mini. Admittedly, I still prefer mechanical switches, but that’s personal preference and I know there are many lovers of compact, short-travel keyboards. E-car battery: How long does the lithium-ion battery last?

I can’t think of any real points of criticism apart from the somewhat strange automatic backlight – if, as written, you can get used to the form factor. The display of the MX Keys Mini in the Logitech Options software is still a bit confusing, but since it doesn’t concern customizable keys, that’s bearable as well.

All in all, the MX Keys is a very good keyboard for minimalists and especially for everyone who frequently switches between Mac and Windows, as well as for individualists who value an optimal workflow with personalized key assignments.

- Advertisement -
Share
Facebook
Twitter
Pinterest
WhatsApp
Previous articleGolden e-scooter: With this crazy scooter you are guaranteed to attract attention
Next articleGeoFlex 110 & 140 Review : Really Good Convertibles For The Money | Tech Reviews
Hocainehttps://fadvices.com
A full time tech enthusiast with a passion for writing. Religiously follow everything new happening in the tech world and share my two cents with my audience here.
RELATED ARTICLES
Reviews