Realme will soon announce a smartphone that can charge at a whopping 240 Watts. It concerns the Realme GT Neo 5, which will probably be completely full within 10 minutes.

Nobody likes to have to wait a long time for your smartphone to be full again. That’s why phones charge faster and faster. During the Mobile World Congress in Barcelona, ​​which will be held from February 27 to March 2, Realme will present the new champion: the GT Neo 5. This Android device can charge at a speed of no less than 240 Watt.

It is the successor to the Realme GT Neo 3, which reached a power of 150 Watts. As a result, it was completely full within fifteen minutes. The GT Neo 5 is expected to take less than 10 minutes to completely fill an empty battery. Realme itself is not (yet) very clear about this.

Huawei Vision Glass: OLED glasses conjure up 120 inches in front of the eyes 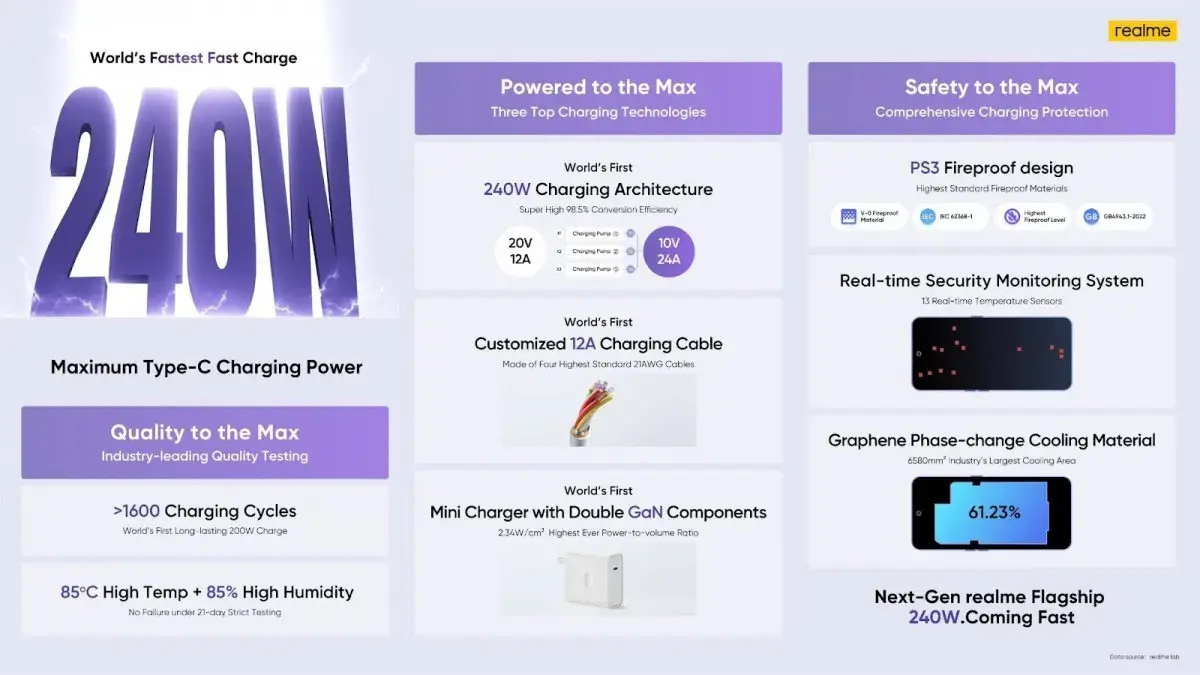 Some people are concerned about safety when they hear about these kinds of charging speeds. Realme tries to reassure this group. The battery is equipped with graphene for extra cooling, 13 temperature sensors are built in and the entire phone has a fire-resistant design. Heat development should therefore not be a problem.

The same applies to sustainability. You should be able to fully charge the battery of the Realme GT Neo 5 more than 1600 times. That equates to plugging in every day for almost four years.

The Realme GT Neo 5 probably has a 6.7-inch OLED screen. The device would run on the Snapdragon 8 Plus Gen 1 chip. We still know it from flagships from 2022 – such as the OnePlus 10T – and it delivers excellent performance. There are three cameras of 50, 12 and 5 megapixels. The battery capacity is 4600 mAh. Incidentally, there may also be a cheaper model that charges with ‘only’ 150 Watt.

It is not yet known whether the GT Neo 5 will come to the Netherlands, but that is obvious. The GT Neo 3 was also for sale here and initially had a price tag of 699.99 euros.

- Advertisement -
Share
Facebook
Twitter
Pinterest
WhatsApp
Previous article
Apple plans to design its own screens and stop relying on Samsung, according to reports
Next article
‘Xiaomi 13 Lite leaked: these are the expected specifications’
Hocainehttps://fadvices.com
A full time tech enthusiast with a passion for writing. Religiously follow everything new happening in the tech world and share my two cents with my audience here.
RELATED ARTICLES
Oppo

Is your phone getting an Android update? Check it out in our overview – week 45